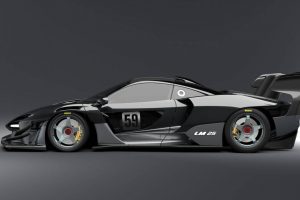 Renowned McLaren racing team Lanzante has revealed its LM 25 Editions, a suite of seven cars to celebrate a significant landmark. 2020 marks a full quarter of a century since McLaren entered the famous Le Mans 24 Hours race for the first time, and won.

Lanzante ran the factory entry #59 McLaren F1, running under the Kokusai Kaihatsu banner for its main sponsor. It was far from the quickest car in the field, as it wasn’t even in the top category and also qualified behind three Ferrari F40s, but nonetheless took overall victory by a clear lap from a top-class Courage. In fact there were seven McLaren F1s entered via various racing teams, and four finished inside the top five.

To mark the occasion, Lanzante is producing an extremely limited run of cars, called LM 25. It’s essentially an upgrade package for an existing McLaren road car, but Lanzante will only make one for each model. So far it’s confirmed that there’ll be one LM 25 for each of the McLaren 600LT Coupe and Spider, 765LT Coupe and Spider, and Senna and Senna GTR models.

As you can tell from the images above, there’s a theme to the LM 25 upgrade pack, no matter which car is subject to it. The most obvious changes are on the outside, with each car painted in Ueno Grey to match the #59. There’s lighter gray accents, again drawing inspiration from the lower parts of the F1 race car, and a matt-on-gloss #59 door number.

The cars all get LM 25-specific carbon-fiber wheels, in a five-spoke design like the 1995 model and with titanium bolts — or center locks on the Senna models. They fit over gold brake calipers which bear red McLaren lettering, just as you’ll spot on the race-winning car.

On the inside, Lanzante fits race seats that are identical to those of the F1 GTR, and save some 40lb (18kg) depending on the specification of the base car. The black and gold theme continues, with gold-anodized switches, carbon fiber, and Alcantara throughout the cabin. In one particularly neat detail, the LM 25 Editions all have a sticker that matches the scrutineering sticker, placed in the #59 before it took to the track back in 1995.

Just like the original car, the LM 25 Editions will feature gold-coated ceramic heat shields for the exhaust system, and gold exhaust tips. One thing Lanzante won’t copy though is the power output. The team had to restrict the F1 GTR for the race, down to 600hp from the factory standard 618hp. Indeed Lanzante may offer a smidge more power, where possible.

All in, the upgrade package will cost in the region of $160,000 (£120,000), and that’s on top of the fact you need to supply the base car itself too. As for the seventh model, Lanzante isn’t saying anything right now, but if it’s anything other than a Speedtail we’d be surprised.

Of course if you fancy something a little more common and slightly less expensive, McLaren is also building its own Le Mans homage cars, based on the 720S.