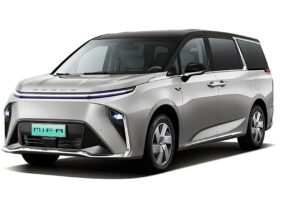 Chinese firm Maxus has launched its first passenger car in the UK, the Maxus MIFA 9, an electric MPV that will hit the roads early in 2023. MIFA stands for Maximum, Intelligent, Friendly and Artistic, traits that the new people carrier is supposed to convey. It’s a full-size electric MPV, and it uses a platform that parent firm SAIC has confirmed is flexible enough to be used for future SUVs and pick-up trucks, too.

THe MIFA 9 was revealed in the UK at the 2022 CV Show in Birmingham, where it debuted alongside the T90EV electric pick-up truck. The MIFA 9 is a full-size MPV that measures 5.3 metres long, and it has a seven-seat layout in a 2-2-3 configuration, similar to that found in the likes of the Volkswagen Multivan and old Chrysler Grand Voyager. To emphasise the MIFA 9’s upmarket aspirations, there are electrically-opening sliding doors and a power-operated tailgate, while the middle row features individual executive-style seating on floor rails, so they can be moved to boost legroom as necessary.

Up front, the MIFA 9 features a touchscreen display and digital dials, while Maxus claims the MPV is equipped with an ‘intelligent driving housekeeper’, which automatically recognises driving style through data and ‘scene driving’, although what this means in everyday use remains to be seen.

Power for the MIFA 9 comes from a single electric motor with 241bhp and 350Nm of torque. This is connected to a large 93kWh battery. At launch Maxus is quoting NEDC-tested range figures of up to 323 miles on a full charge – expect the official WLTP figure to be less than that. No details were given about charging capability, but since SAIC is also parent firm to MG, it’s not beyond reason to think that Maxus will take advantage of the same charging tech that firm uses.

Prices for the MIFA 9 will be announced later in the summer, ahead of order books opening in August, with first deliveries expected to take place in the new year. Either way, the MIFA 9 will enter an EV market that’s relatively thin for people carriers. The Mercedes EQV or Tesla Model X are the only other electrified models with the same sort of passenger-carrying ability, but the Mercedes has a shorter range, and the Maxus is likely to be considerably cheaper than the Tesla.

Check out our pick of the best MPVs currently on sale…