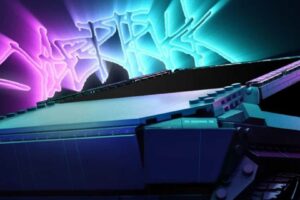 It was really only a matter of time before a “LEGO” Tesla Cybertruck came to market, and now its launch is just two days away, but it won’t actually be produced by LEGO. Instead, Mattel Creations has announced that MEGA will be debuting the 3000-piece Cybertruck on October 15, 2021, at 9 AM PT. MEGA is essentially Mattel’s version of LEGO.

Mattel already launched a Hot Wheels RC Cybertruck, which is loaded with specific details that only a true Cybertruck fan may appreciate. It seems Mattel is going to the next level with the MEGA Tesla Cybertruck. As you can see in the images below, it appears to have a retractable tonneau cover, and it wouldn’t be complete without the broken windows.

If you’re not familiar with MEGA, the toy line typically creates LEGO-like block toys modeled after popular brands. Mattel says “Everyone at MEGA loves the Cybertruck,” so it’s time to offer the toy version to the public. MEGA writes:

“It is a one-of-a-kind building experience that culminates in an iconic, display-worthy model of the new Cybertruck that only MEGA can give you.

Inspired by the original designs from Tesla’s upcoming release, we created a MEGA X Cybertruck you can build brick by brick and customize to reveal different hidden features that can only be discovered while you build it.”

The company goes on to explain how committed its designers were to making the MEGA X Cybertruck as realistic as possible. Aside from it looking practically identical to the real deal, Mattel says it has an adjustable air suspension, armored glass windows, and other Easter Eggs you can only discover by assembling it.

The MEGA X Cybertruck will retail for $250.00, which is ironically more than the fully refundable $100 deposit needed to get in line for the real Tesla Cybertruck. Chances are, the $250 will be a good investment, however, since toys like this often become sought-after collector’s items. In fact, we know many people who may buy such a toy and then turn around and sell it for a profit.

To see the MEGA X Cybertruck in greater detail, head to the Mattel Creations source link below. There, you can scan a QR code, which takes you to an interactive AR version of the toy Cybertruck.

Is this something you’re interested in buying? We assume demand will be high and it won’t be easy to get one. Perhaps we’ll get ahold of one to share with you. Let us know in the comments if you end up being the proud owner of a MEGA X Cybertruck.