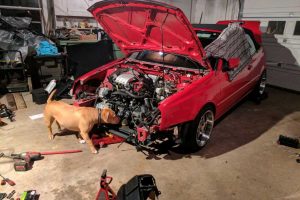 Independent repair shops and aftermarket parts retailers have been pitted against major automakers and their dealer networks in Massachusetts for years. The state has served as the primary battleground for right-to-repair legislation that would permit/prohibit customers and independent entities from working on or modifying vehicles. However, a major victory came on Tuesday after voters overwhelmingly approved a ballot measure updating existing right-to-repair laws to give vehicle owners and small shops better access to vehicle data typically reserved for industry giants.

The resulting decision gives consumers substantially more control over what’s done with the data being harvested by the industry (often without their knowledge) and frees up their options on who to go to when their vehicle needs fixing.

Full disclosure: this is one of those topics where I fall so hard on one side of this issue that I have to admit to my bias upfront to avoid looking like I’m acting in bad faith. I staunchly support right-to-repair laws in all forms and find the industry opposition to them reprehensible. Owners should absolutely have access to the data their vehicles generate and independent repair shops should have access to the tools used by branded service centers.

With that out of the way, it’s at least fairly obvious why industry players want to discourage the right-to-repair movement. They want the impunity to harvest driving data without someone looking over their shoulder and nullify the scant amount of competition that comes from do-it-yourself types and independent garages.

The Alliance for Automotive Innovation (which represents practically every car manufacturer currently selling in the U.S.) has repeatedly stressed the importance of modernizing vehicles with “mobility” features, like data acquisition. But it hasn’t been too keen on sharing said data with customers. It has claimed that the accumulated info could be dangerous and open consumers up to privacy/security concerns. While this begs the question of why they’re harvesting on-road data if it’s so freaking dangerous, only the most naive person would come to any answer other than it making them money.

Of course, the Alliance for Automotive Innovation (AAI) can blame businesses for being greedy too. It’s has been claiming aftermarket retailers and small shops just want the data for themselves. While technically true, some amount of data procurement is required just to work on modern vehicles and it’s not like anybody truly believes one business entity is going to act more responsibly with consumer info than another.

“Automakers have made available all the diagnostic and repair information that is needed to service a vehicle safely and securely. That consumer choice will not change,” he said. “Moving forward, automakers will continue their work to protect our customers and prioritize their safety, privacy, and vehicle security.”

The updated law expands access to mechanical data related to vehicle maintenance and repair by requiring automakers to make available all mechanical information needed to diagnose and repair vehicles as well as perform routine maintenance starting with 2022 models. It also gives vehicle owners and independent repair shops access to real-time mechanical data from telematics — systems that collect and wirelessly transmit information such as crash notifications, remote diagnostics and navigation from the vehicle to a remote server.

Meanwhile, right-to-repair supporters (including the Auto Care Association and retailers like O’Reilly Auto Parts) have claimed the passed initiative closes a loophole in the current law that exempts data transmitted wirelessly through telematics system from being shared and will ultimately give vehicle owners more choice and control over how their data is used.

The ballot passed with 75 percent of voters in Massachusetts supporting. Right-to-repair advocates have called it an important victory and feel the state should continue setting a national example.

a version of this article first appeared on TTAC