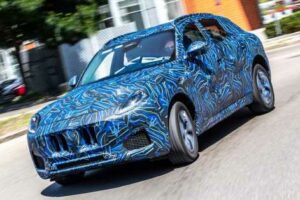 The Maserati Grecale will only make its debut later this year, but we’re getting an early glimpse of the brand’s upcoming SUV model thanks to Stellantis CEO Carlos Tavares, who took a prototype out for a test drive recently.

These images are a lot less blurry than the teasers we got back in February this year, and despite the camouflage, certain design cues do stand out. For starters, there’s the distinctive Maserati grille at the front that is accompanied by teardrop-shaped headlamps as well as honeycomb mesh inserts for the sporty air intakes in the bumper. A long hood and rakish windscreen form the SUV’s profile, along with a sloping roofline, while the sides also sport prominent wheel arches and an upswept belt line. We don’t get a shot of the Grecale’s rear, but from the earlier teasers, we know it will have quad tailpipes and slim taillights.

The Grecale will slot in below the larger Levante and is set to compete against the Porsche Macan, although Maserati has yet to provide powertrain details. Conventional internal combustion engines and hybrids are said to be available options, with a fully-electric version set to arrive later in 2022. The SUV is expected to be underpinned by the Giorgio platform that is also used for the Alfa Romeo Stelvio and will be built in Cassino, Italy.