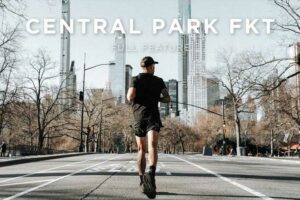 We’ve seen all sorts of “races” over the years, and while many have been of the traditional variety, we’ve also shared plenty that are outside the norm. That said, this recent story may top all Tesla racing stories to date, and it’s not because of speed, but rather, stamina and endurance.

Marathon runner Robbie Balenger has one of the best records in the world when it comes to running extremely long distances, and he’s able to do it in record time. He’s run typical 26.2-mile marathons, as well as 50 miles, 100 miles, and much more. If there’s an ultra runner out there with the potential to outlast a Tesla Model 3, Robbie may be the one to pull it off.

As the story goes, Balenger and the Model 3 will begin the “race” from the same starting point. They’ll start about 250 miles outside of Austin, Texas, the home of Tesla’s new factory and world headquarters.

The Model 3 will simply drive until it’s completely out of juice. Balenger expects the Tesla sedan to make it about 267 miles. Meanwhile, the ultra runner will have a total of 72 hours to try to run a greater distance.

As shared by Autoblog, Balenger has an incredible resume that suggests he’ll be able to win this interesting endurance match. The ultra runner has run across the entire country, and he holds records for running loops in New York City’s Central Park, where ran nearly 100 miles in just 19 hours worth of loops. Balenger has also far exceeded the Model 3’s estimated range, running 485 miles on the Colorado Trail in about 11 days.

To learn more about Robbie Balenger, check out the video embedded below. Once you’ve had a chance to watch, leave us a comment below. Would you put your money on Balenger or the Tesla Model 3? For those interested in seeing how it all plays out, the race runs from April 11-13, 2022.