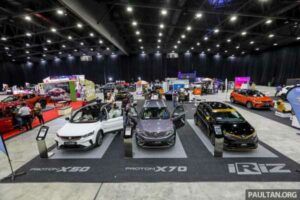 New car sales in the country continue to stutter, with sales dipping again last month on the heels of an already softening April. The Malaysian Automotive Association (MAA) reported that a total of 46,663 vehicles were delivered last month, which was a 11,249-unit (or 19.4%) drop from the 57,912 units sold in April.

The association attributed the drop to a number of factors, not least the nationwide implementation of the third movement control order (MCO 3.0) in the second week of May. It was also a shorter working month due to the Hari Raya Aidilfitri festive period, and the ongoing global chip shortage continued to affect production of some makes.

The dip in total volume meant that just about every brand ended up with a red arrow last month. Market leader Perodua sold 17,973 units in May, 11.9% (or 2,426 units) less than the 20,399 units it managed the month before. Despite this, it continued to widen the distance between it and second-placed Proton, which saw its sales drop by 40.2% to 8,771 units last month.

Toyota sales also dropped by 18%, with the 7,495 units sold last month being 1,641 units less than the 9,136 units achieved in April. It is however still pulling away from fourth-placed Honda, which was the only top-five brand to see growth last month. The company sold 5,113 vehicles in April, resulting in an 0.5% increase, but this is taking into account a revised April total of 5,090 units (vs the 5,389 reported last month).

Likewise in the premium segment, with Volvo (-29.8%) and Lexus (-30.6%) registering lower numbers last month. Having switched to a quarterly reporting system, we’ll only be seeing BMW Group Malaysia’s April-June figures in July. Again, still no sign of anything from Mercedes-Benz, which had indicated to the MAA earlier this year that it would resume sharing its sales data.

With the country being under full lockdown for the entire month and showrooms – as well as production plants – closed for the duration, expect next month’s sales numbers to be almost non-existent, save for the carrying forward of May registration units not invoiced in the month.