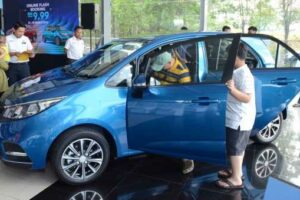 The Malaysian Automotive Association (MAA) has revised downwards its forecast for the 2021 total industry volume (TIV), which is the total sales of passenger and commercial vehicles in the country. The original 2021 TIV forecast announced early this year was 570,000 units – it’s now down to 500,000 units. The TIV for 2020 was 529,434 units.

This is due to the fact that the automotive sector has been effectively shut down in Malaysia from June 1 as part of the government’s lockdown measures to suppress Covid-19. Car factories and showrooms are not allowed to open in Phase 1 and 2 of the National Recovery Plan (NRP or PPN).

“MAA has decided to revise our forecast for the TIV 2021 after considering many factors, especially concerning an assumption on the government’s directive that automotive plants, distribution centres and sales showrooms would not be allowed to operate during Phase 1 and 2 and will only re-open in Phase 3 of the NRP,” MAA president Datuk Aishah Ahmad said at the auto club’s 1H 2021 market review briefing today.

Some might have expected the revised total to be lower, given the current difficult conditions. However, MAA said that the global economy is expected to grow at the fastest post-recession pace in 80 years, led by major economies like the US. Locally, Malaysia is expected to record a positive GDP growth this year, albeit lower than the earlier 6% to 7.5% projection.

Also, the government had launched stimulus packages (Pemerkasa Plus is the latest edition) that included sales tax exemption for carbuyers, extended to the end of 2021. Bank Negara’s current and low overnight policy rate (OPR) of 1.75% means that hire purchase interest rates are also low. MAA also mentions less stringent vetting by banks for HP loans as the number of applications are down.

On the flipside, MAA notes that consumer sentiment is expected to remain weak due to an uncertain economic environment, and apprehension about paycuts and layoffs. Businesses are also likely to hold back investments in view of the continuing uncertainties, and the current political environment also doesn’t help matters. There’s also uncertainty over the path of the pandemic, and the subsequent containment measures it might bring.

MAA’s 500k 2021 TIV forecast was made based on the government’s directive that automotive plants, distribution centres and showrooms are not be allowed to operate during Phase 1 and 2 of the NRP. The assumption is that the auto sector will restart in August – if this is not the case, the forecast will have to be revised again.

The most pressing problem for carmakers in Malaysia now is fulfilling orders, which are coming in. Aishah described the order bank as good. “Orders are coming in, people still want to buy. The issue is when we’ll be able to deliver with the plants closed and showrooms closed,” she said.