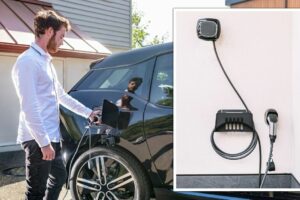 From today, June 15, all new homes built in England will be required to have electric car chargers installed, as well as new-build workplaces, supermarkets and buildings undergoing major renovations. Any new building developments with associated parking must have access to electric car charge points, in a change to building regulations.

The plans were originally announced in November 2021 when the Government said it will see up to 145,000 charging points installed across the country each year.

The changes to the Building Regulations 2010 take effect today for use in England, but there are some exceptions.

It does not apply to work subject to a building notice, full plans application or initial notice submitted before that date, provided the work is started on site before June 15, 2023.

André Dias, Founder and CTO of Daloop, said the new regulations were an important and necessary step to ensure the transition to EV vehicles is as smooth as possible.

He also highlighted the benefits it will have for the wider EV charging network.

Speaking to Express.co.uk, he added: “The Government’s new law requiring new residential homes and buildings to have an electric vehicle charge point, is a very welcome step in our collective journey to enabling decarbonised mobility.

“This law is necessary as reliance on a roadside, on-demand fuel supply model will not be cost-efficient, nor will it be entirely reliable for when EV users become a majority.

“Despite electricity prices continuing to rise, home charging will remain far cheaper than driving a combustion engine vehicle, and the benefits of a home charger in terms of convenience, accessibility and once installed, affordability, is clear when compared to other charge point facilities.

“Government efforts to expand the electric charging network must happen at the infrastructural level like this in order to be effective and to ensure that the target of installing 300,000 new EV charging points by 2030 is reached.”

Any building undergoing large-scale renovations which leaves them with over 10 parking spaces will be required to install electric vehicle charge points.

At the time of the original announcement, the Prime Minister praised the move, saying it was a “pivotal moment” for the UK in its “green industrial revolution”.

Mr Johnson also said the Government’s investment into the net-zero strategy should trigger around £90billion of private sector investment.

Mr Dias continued, saying: “Adapting infrastructure to bring charge points to the spaces that vehicle users already frequent, such as retail destinations and homes, makes the change to electric vehicles far easier for consumers, both practically and psychologically.

“This announcement goes in hand with Government commitments revealed this week to now focus predominantly on delivering and developing the charging infrastructure to support the EV transition.

“These moves are reassuring and will hopefully encourage more of society to make the switch and go green.”

The Government also invested £20million into its On-Street Residential Chargepoint Scheme, which could see the number of on-street EV chargers in the UK double.

This will give local councils the opportunity to install as many as 4,000 EV chargers, which could double the total number.

The scheme is part of a wider plan to invest £1.3billion into nationwide charging infrastructure in the next four years.

The new building regulations come just a day after the Government announced it would be ending the electric vehicle plug-in grant scheme with immediate effect.

It said it was doing this to focus on improving the EV charging infrastructure around the UK.