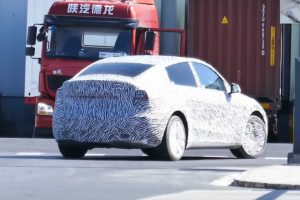 Tesla is probably conducting final testing before series-production. Start the sales approval has been already granted.

Tesla is almost ready to launch its second Made-in-China (MIC) model, the Tesla Model Y, and proof of that is this video.

A camouflaged prototype, most likely the Chinese version of the Model Y (we are not aware of how much different it might be compared to the North American version), was seen on November 6, at about 11:30 a.m., at the west entrance of Tesla Giga Shanghai.

According to WU WA channel, who closely follows all the news about Tesla in China, the car is undergoing road tests.

“On the morning of November 6, I was passing by the west gate of the factory on my way back to the original location after completing the ground recording of the west side of the factory, when I found a fully camouflaged car parked at the west gate ready to enter the factory, I immediately realized that this car should be the MIC Model Y that everyone has been talking about recently, I quickly took out my camera to shoot, and when I ran to the bridge, the “camouflaged car” had been slowly driving into the factory.”

The Chinese media reports that the MIC Model Y is already approved for sales by the MIIT, which means that we should expect sales in 2-3 months from now (January or February 2021), as this is the usual time between approval and sales start in China.

The spec listed by MIIT is as follows: