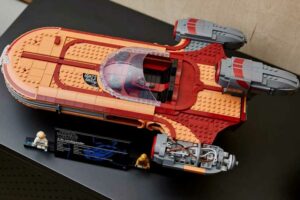 Sure, there are wheeled vehicles in Star Wars, but everyone can probably agree that Luke Skywalker’s X-34 Landspeeder is the most car-adjacent thing in the original space epic. The actual prop used in the movie was a car, cobbled together from a VW Beetle platform and kit car parts, converted to a single front wheel; mirrors were used to hide the wheels as it sped along the desert in A New Hope and give the impression that it was floating. The Landspeeder resembles a midcentury American concept car, albeit with a trio of early Boeing-jet-style engines on its tail and an early-Batmobile-style bubble canopy.

If you grew up watching Star Wars, you probably at one point pined over this very SoroSuub Corporation Landspeeder, imagining whooshing down to the 7 Eleven for a slushie with a few of your pals (or droids). Well, that’s still not in the cards, but you can own a Landspeeder of your own soon, at least in LEGO form. The new kit goes on sale May 4th—as in, May the Fourth Be With You, the informal Star Wars holiday—for a cool $199.99.

The speeder is substantial, measuring 20 inches long, 12 inches wide, and 4 inches tall, and is made up of 1,890 pieces. As part of the Ultimate Collector series, it has superb detailing, from the engine/thruster internals to the cockpit and its steering yoke to the ribbed metal bumper that wraps around the nose. LEGO even includes a specifications panel on the display stand, though if you want to recreate the movie prop’s hovering action (fictionally referred to as the Repulsorlift system), maybe try displaying the completed Landspeeder with some fishing wire lines hanging from the ceiling.

LEGO rounds out the kit with two minifigures, one of Luke Skywalker and another of C-3PO, his helper droid. While this isn’t the first Landspeeder kit LEGO has offered, it is the first large-scale, detailed version. It’ll go great on the shelf alongside your $800 Millennium Falcon or massive Star Destroyer … and now back to our regularly scheduled automotive programming.