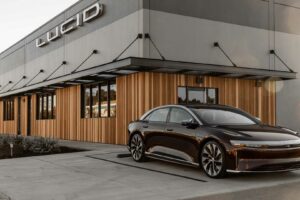 According to a recent report published by Drive Tesla Canada, Lucid has dealt with two reported fire incidents over the course of just four months. The fires broke out at the electric automaker’s factory in Arizona.

Lucid is slowly but surely increasing its production speed at its first factory in Casa Grande. Arizona. Since the factory first officially opened, the local fire department has been dispatched to the location on at least two occasions. Drive Tesla Canada notes that according to fire department records obtained by Business Insider, both incidents involved fires related to electric car batteries.

Based on the information in the fire department’s reports, one fire happened on March 14, 2022, at 10:30 PM local time. The fire broke out at Lucid’s powertrain center, and thermal runaway was noted. This basically means that even if the fire is extinguished, it can continue to reignite long after the initial incident as the rising heat continues to impact additional battery cells. This is one of the reasons EV battery fires are harder to deal with than other fires.

The fire department responded to the battery-related fire incident, which firefighters learned was upgraded to a “hazardous situation” while they were headed to the site. By the time the first responders arrived, the battery had already been put in a tank of water. One person ended up with burns and needed to be treated at a local hospital.

A second fire occurred around the same time in the evening, on June 19, 2022. The fire department was dispatched to respond to an active vehicle battery fire inside the Arizona factory. Once again, when the units arrived, the battery had already been partially submerged in water outside the facility. Drive Tesla Canada writes that four Lucid workers had to have medical treatment for possible smoke inhalation, and another needed to visit a local medical facility.

Anonymous sources reported that Lucid was forced to evacuate the factory during both incidents. Hopefully, the EV maker has figured out what caused the issues, and there won’t be any continued concerns going forward.