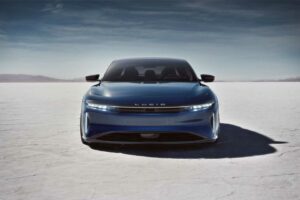 According to recent reports, Lucid’s Arizona site will expand to about three times its current size. Currently, Lucid’s first factory sits on some 600 acres of land in Pinal County. However, news broke this week that the country bought another 1,400 acres.

Tesla’s Elon Musk has said on more than one occasion that Lucid, as well as Rivian, is going to struggle to make it, which is arguably true. If you look at Tesla’s rocky past and that of most automotive startups, tough times are a given. Not to mention the impact of the global pandemic and related chip shortage and supply chain issues.

With that said, both Lucid and Rivian are pushing forward amid the struggles, with Rivian already deep into plans for a new factory, and now Lucid planning major expansion at its automotive production factory in Casa Grande, Arizona.

Pinal Country reportedly leased the new land from 14 different property owners around Lucid’s Casa Grande facility. It cost the county a whopping $113.5 million. The acquisition expands Lucid’s available acres to around 2,000. According to Teslarati, that much land could work to make the electric startup automaker’s manufacturing campus as large as that of legacy automakers’. Once the project is complete, Lucid could hire as many as 6,000 new employees.

Official plans for the newly acquired acreage are unknown. However, we do know that a Customer Experience Center is expected to come as part of the plan. The new center will require expanding roads in the area, which will be paid for by Casa Grande.

As we previously reported, Lucid is making plans to enter the third stage of factory expansion in Arizona in 2023. The new land could be used for more buildings, though Lucid has already shared that it will also expand current buildings and ramp up production to 40,000 EVs annually.

Currently, Lucid is having trouble ramping up production, which is to be expected of an EV startup in the midst of global turmoil. The automaker delivered less than 700 cars in Q2 2022. Moreover, it dialed back its future production estimates for 2022 by 50 percent thanks to monumental issues related to supply chains and logistics.

That said, Lucid CEO and CTO Peter Rawlinson is confident the company has figured out what the issues are. He says demand is solid, and the EV maker will be doing everything it can to overcome the bottlenecks and make notable progress going forward. Sound familiar …?