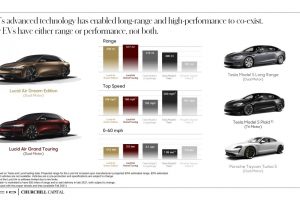 The Lucid Air that made its debut last September arrived with the Tesla Model S squarely in its sights, with some big numbers in tow – it boasted of up to 1,080 hp in its most powerful Dream Edition form, while the most efficient Grand Touring variant had a maximum range of 832 km.

Now, Tesla’s flagship sedan has been comprehensively revised for its facelift, and while the Air hasn’t received an update to that effect, it has added a single-motor, RWD base variant for a total line-up of four variants of the Air. The Californian start-up is not shy about positioning its first product against its perceived competitors over various parameters, though.

Lucid pitches itself as ‘post-luxury’, a genre that the start-up says goes beyond traditional expectations of luxury, in which it places established brands such as Mercedes-Benz (which its calls classic luxury), BMW (sport luxury) and Audi (tech luxury). As for what’s likely to be its closest rival, Lucid considers Tesla to be ‘innovative, but not luxury’ within the same diagram. In terms of battery range, the Lucid Air Grand Touring tops the lot with its aforementioned 832 km of range, followed by the Air Dream Edition with 805 km. The remaining places are occupied by the Model S Long Range with 659 km, the Model S Plaid with 624 km and the Taycan Turbo S with 322 km. The recently facelifted Model S will also feature a Plaid+ variant, which has been said to boast an identical 832 km of range.

Top speeds are an identical 269 km/h for both Lucid Air variants compared here, with the Taycan Turbo S weighing in at 257 km/h and the Model S Long Range at 248 km/h. Comfortably boasting the highest top speed of this quintet is the Tesla Model S Plaid, at 320 km/h. For the 0-96 km/h acceleration measure, Lucid claims the second quickest sprint time of under 2.5 seconds with the Air Dream Edition (the top spot once again goes to the Model S Plaid at 1.99 seconds), while the Taycan Turbo S clocks 2.6 seconds, the Air Grand Touring takes 3.0 seconds and the Model S Long Range takes 3.1 seconds to the benchmark.

Lucid also claims to offer the most power-dense electric drive unit when compared to an “American EV brand” and a “German EV brand”, which is presumed to be Tesla and Porsche, respectively. Motors for a ‘full size model’ and a ‘compact model’ for the American EV brand are depicted in the illustration above, which is likely to be the power units for Tesla’s Model S and Model X, and the Model 3 and Model Y, respectively.

Here, comparisons are made on the basis of the drive units’ power-to-weight ratio in terms of hp to kg, which the Lucid Air tops at 9.0 hp/kg. This is followed by the American EV brand’s motors for its full-size and compact models at 3.2 hp/kg and 3.1 hp/kg, respectively, while the German entry rounds up quartet with 2.6 hp/kg, according to Lucid’s chart.

Last but not least, Lucid says the Air will come to market with a total of 32 sensors, making it the most comprehensive sensor suite in a vehicle when it goes on sale. This will enable Level 2 self-driving, says the firm, and have the ability to receive over-the-air updates. Machine learning is on the cards too, as Lucid says the autonomous driving features will continually be enhanced with the collection and analysis of fleet data.

What say you, dear readers? Are these stats enough to sway you from the established marques in the electric vehicle era?