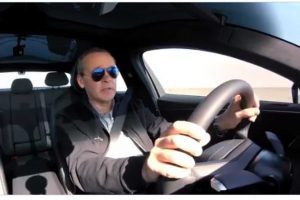 He’s impressed but admits there is still some fine-tuning needed.

Lucid Motors’ CEO Peter Rawlinson recently took to the Bay-Area streets in a release-candidate Lucid Air all-electric sedan. It marked the first time a non-camouflaged production-version of the Air has driven around on public streets.

Rawlinson says that he’s going to “head up to Skyline” to enjoy some “twisty sections” and we assume that he meant Skyline Boulevard (US-35). Overall he seemed mostly pleased, and comments on how well the suspension is tuned, the body composure, how quiet it is inside the cabin, and how great the steering feel is.

However, Rawlinson also notes that the hill-hold software still needs some adjusting and so does very low-speed driving; specifically from 0-2 mph. We appreciate that he didn’t just swoon over everything, and admits that there are some aspects of the vehicle that still need some fine-tuning.

After all, the Air is still about 6 months away from production, so it’s obviously still in need of some final tweaks. The vehicle had been set for a spring 2021 launch, but Lucid recently announced that they are pushing back production until the summer/fall to ensure the vehicle will meet the high-quality standards that they have set.

At the end of the video, we see Rawlinson talking with someone outside of the vehicle (we don’t get to see who), and he explains that it’s the first time the vehicle has been in public without camouflage. Rawlinson calls the vehicle “my baby” and like a proud father starts boasting a bit about the fact that it has 1,000 horsepower and can drive 500 miles per charge.

We don’t really blame him. It’s been a long journey for Rawlinson. Lucid had some very difficult times when it looked to many that the company may never bring the Air to production – and to be clear, they haven’t yet. However, it is looking (the recent delay notwithstanding) like we will soon see customer deliveries of the Air, and we’re happy to see that. Not just for Rawlinson’s sake, but for the entire electric vehicle industry.