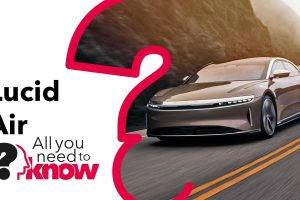 This single video sums up the Lucid Air rather well.

It’s the fastest driving, and fastest charging electric vehicle you can buy. This is the Lucid Air, and here are 10 things you need to know. Range, efficiency, performance, and even powering your home from your car – all some of the headlines from the recent unveiling of the first car from Californian startup Lucid Motors. And with impressive specs across the board, could this be the new king of the hill in the world of EVs? Let’s find out.

If you like this video please make sure you subscribe to the channel and give us a thumbs up, which tells other people it’s worth watching.

1. RANGE AND EFFICIENCY – “The Lucid Air all-electric sedan will come in four variants, more on those in a moment because the most expensive version isn’t the one which travels farthest. That headline number is 517 miles on a single charge. That’s enough for roughly 9 hours of solid driving – you could have breakfast in Paris and drive down to have dinner in Milan, without needing to top up. Lucid says this is only possible because they have focused on efficiency and optimizing every aspect. They developed their own ultra-compact permanent magnet electric motors, 45% lighter than their nearest competitor, and 59% more powerful. They can even run in various configurations, allowing for one, two or three power units in the Lucid Air.

2. PERFORMANCE. “The specs wipe the floor with combustion cars which can cost up to ten times the price. And that’s all because electric power delivers you instant torque. 0-60mph is covered off in 2.5 seconds. The quarter-mile? An eye-watering 9.9 seconds, which Lucid say is repeatable without any kind of performance fade. There’s over 1080hp on tap and a top speed of 168mph, which puts the Lucid Air at the top of the electric road car spec sheets. It beats rivals like the Porsche Taycan Turbo S and the Tesla Model S, it even matches supercars like the McLaren 720S. But remember this is all from a 5 seat luxury sedan.”

3. THE MODELS. “The Lucid Air will come in four price points, and each of those cars will be released from early 2021. And that brings us to the price. Lucid said the Air will start at “less than $80,000” and that’s the entry-level mode. That model won’t be released for over a year, so which one can you get first? That would be the Lucid Air Dream Edition, and it costs $169,000.

4. AUTONOMY. EVs and autonomous capability seem to go hand-in-hand, but here Lucid is keeping expectations in check. There are no promises of self-driving here, but instead, the car combines 32 different sensors, cameras, radar and HD Lidar in what they call DreamDrive. It will handle Level 3 automation, and that means the driver must always be ready to take control. These systems are improving overtime for all EV makers, and with full Over The Air (OTA) technology, the Lucid Air is ready to receive regular software updates wirelessly.

5. 924 VOLTS –Whilst bigger isn’t always better when it comes to voltage, in this case, Lucid has found a way to add 20 miles of range to your car every minute. That’s the peak charge rate. If you’re new to EVs, batteries slow down their charge speed as they fill up, but it doesn’t stop the Lucid Air achieving 300 miles of range in a 20 minute stop. Lucid has drawn on their background as the battery supplier to Formula E to bring racing car technology to the roads.

6. WUNDERBOX – Lucid made special mention of how they’ve packaged the onboard charging electronics in a single package they called the Wunderbox. This allows the car to charge quickly, whether connected to a 400v charger or the new 800 volt, 350kW chargers rolling out across Europe and North America. Developed in-house, the Wunderbox isn’t just responsible for charging the car, but also your house. The Lucid Air has bi-directional capability. That means you can use the giant battery in your car to power your home, to support the power grid, or even to charge another EV.

7. THE BATTERY IS MODULAR. The battery in the Lucid Air gives the driver use of 113kWh but Lucid say the modular design means it’s easy to adjust, and that means when they come to their next models, they can be flexible with battery size and price.

8. GLASS COCKPIT. The interior of the Lucid Air is dominated by two screens. The first, is a 34 inch curved glass 5k screen which sits in front of the driver. The second screen sits between the driver and passenger, but is retractable to reveal hidden storage and to keep the screen safe. Lucid has Amazon Alexa integration for voice assistant and home automation, for example.

9. WILL BE MADE IN ARIZONA. The name Lucid was born in 2016, when they announced a $700m investment in building the first greenfield EV factory in North America. The Arizona factory is designed from the ground up to be modular, so they can expand as demand grows. The factory will make 380,000 cars a year at full capacity.

10.LUCID STUDIOS. Lucid will have physical locations you can visit and they call these Lucid Studios. They say these are modelled on a lounge, with a relaxed atmosphere for you to explore their technology, and find out more about the cars. They’ll even have Virtual Reality headsets so you can configure your choice of colours and then jump into a virtual world to explore the Lucid Air from any angle.

11.BONUS. And we couldn’t go without adding in a little bonus. Lucid also revealed their next car, which they called Project Gravity. Whilst we only got to see a few teaser shots of the futuristic-looking SUV, it’s safe to assume the production model will probably resemble the prototype. Production will start in early 2023.

Lucid is taking $1000 deposits now and deliveries begin in Spring 2021.

Now tell us what you think of the Lucid Air? Does this set the new benchmark for electric cars? Or does the price point mean it’s only for those who can afford a luxury toy. Let us know in the comments below.