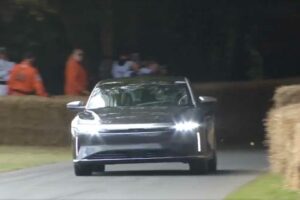 One of the most important electric vehicle debuts at the 2022 Goodwood Festival of Speed was the Lucid Air, present for the first time in the UK and Europe by extension. They had three Airs present at the venue, one Dream Edition and two Grand Touring examples (one of which was the 1,050 horsepower Grand Touring Performance) with the latter being used to set a record time for production vehicles at the event.

The Air Grand Touring went up the hill with none other than Ben Collins, former Top Gear Stig, who also happens to be a professional racing driver with decades of experience. Ben Collins is a staple of the Goodwood hillclimb, taking part every year and driving all manner of mad machines up the hill, often in record time.

This year, Ben drove the 2022 Air Grand Touring Performance and he was able to get it to the finish line quicker than any other series production car there. The Air he drove was completely stock, yet the vehicle showed immense agility and speed as it powered its way up the track that was jam-packed with spectators hoping to catch a glimpse.

With a time of 50.79 seconds, the Air was quicker than all other unmodified vehicles that tackled the hill this year. Furthermore, and perhaps this is an even more impressive achievement given the context (the Festival of Speed is a gathering of the most extreme and quickest cars ever made, spanning all eras) was the fact that the Air placed 12th overall, and this includes all the mad-power, low-weight racing cars on slick tires that also went up the hill.

Being present at the venue, I actually had the chance to speak to Lucid representatives about how the brand sees its future in Europe (and in the UK where it will have to have a right-hand drive variant). The Airs at Goodwood drew remarkably big crowds, and you could hear people shouting words of praise as they approached the vehicle or they saw it being driven by. This is a subject of a future article, though, about how Lucid was received in Europe and how it plans to begin sales on the continent.