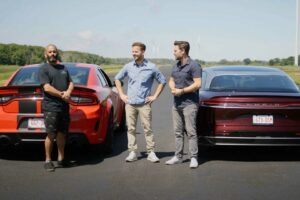 The 2022 Dodge Charger SRT Hellcat Redeye Widebody Jailbreak with its 807 horsepower supercharged V8 is one of the quickest sedans ever made, although it’s still far off the level of performance shown by the new Lucid Air Grand Touring Performance (GTP), currently the most powerful and quickest Air that you can buy.

The 1,050 horsepower GTP sprints to sixty in 2.5 seconds and it maintains its very high rate of acceleration all the way to its top speed of 168 mph (270 km/h). The Charger hits 60 mph in around 3.5 seconds and has a much higher top speed, 203.9 mph (327 km/h), but in this quarter-mile drag race set up by Throttle House it never even stands a chance.

The way the Lucid Air GTP just sprints ahead both in the standing start and rolling races, it frankly makes the Charger Jailbreak look slow… and it really isn’t. The problem for the Charger when setting off the line is of course traction – it’s only rear wheel drive and with the mountain of torque that it has to send to the ground, it’s virtually impossible to get a clean start with no wheel spin.

Even with the weight difference that’s in the Charger’s favor (it weighs around 4,585 pounds compared to the Air’s 5,250 pounds) and evenly matched power-to-weight ratio, the EV seems to be in a different league when it comes to acceleration. It’s actually remarkable to watch and see the difference…

Even with famed motoring journalist and Top Gear presenter Chris Harris behind the wheel, there’s nothing that can be done to make the Dodge even come close to the Lucid. In fact, Harris is taken for a quick ride in the Air after he loses to it in the Charger and the real expression of fear on his face as he is pinned to the back seat is absolutely priceless, as are his comments when he can’t get out of the vehicle quickly enough, saying he’s perfectly happy to lose to such a ridiculously quick vehicle.