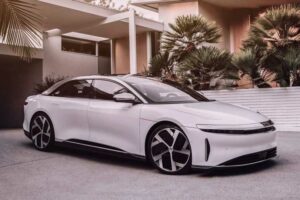 If you’re anxious to see the Lucid Air on the road, you’re not alone. Thankfully, the latest news from the California-based EV company indicates that soon we’ll see the sleek sedan in public. Reservation holders for the top-tier Dream Edition will take delivery of their cars later this year, and now with two variants to choose from.

Lucid will offer the Air Dream Edition in either Performance or Range trims, with the former offering maximum horsepower and the latter delivering maximum driving distance. Performance-spec cars will pack an astonishing 1,111 horsepower (828 kilowatts), which is more than the previous claim of 1,080 hp. Fun fact: that’s also why Lucid’s CEO Peter Rawlinson has been holding up four fingers in recent photo ops, to indicate the new power figure. This is good for 0 to 60 miles per hour in a brisk 2.5 seconds, with a projected driving range of more than 450 miles.

Lucid Air Range models benefit from 500-plus models of driving capacity, with some unofficial tests indicating up to 517 miles in total. The trade-off – if you can call it such a thing – is that this version only has 933 hp, which is 178 less than the Performance trim.

So, the choice falls to the customer with both trims costing the exact same: $169,000, before government incentives. On one hand, the maximum-attack power of the Air Performance sounds enticing, given the world’s recent obsession with the Tesla Model S Plaid. However, the Air Range is looking like the EV to actually drive 500-plus miles in real-world scenarios, making it a winner on that metric alone.

We’ve spent time with the Lucid Air already, but only from the passenger seat (and on more than one occasion). But we look forward to sitting behind the wheel of the long-anticipated EV in the coming weeks.