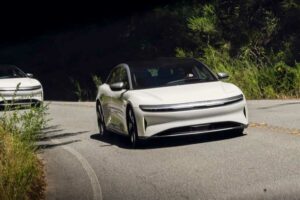 Car and Driver came up with the idea to take electric vehicles on a 1,000-mile loop to figure out which options are best for EV road trips. The extensive loop factors in each car’s range and charging times. The publication says the Lucid Air is the new winner, knocking the Tesla Model S out of the top spot, but there were issues, as expected.

Long story short, the range-topping (in more ways than one) Lucid Air Grand Touring was the winner by a notable margin. The publication says the ultra-luxury electric car completed the loop in 15 hours and 41 minutes, which is 33 minutes quicker than the Tesla Model S. The Air spent 95 minutes of the time charging. The Model S charged for 96 minutes on the loop last year.

While the Lucid Air was the winner by over half an hour, Car and Driver is clear to say that “its victory didn’t come without drama.” It explains that Tesla’s Supercharger network is pretty reliable as a whole. However, the newer Electrify America DC fast charging network still has its fair share of issues.

Car and Driver writes that many Electrify America chargers were out of order in Cincinnati, Ohio. One very fast option, a single 350 kW plug, was available, but it didn’t work as it’s supposed to. It reportedly took 40 minutes to add 46 percent, which was much longer than anticipated.

As the Lucid Air driver continued on, there were no public fast-charging options around Athens, Ohio. This meant taxing the Air’s range to travel another 377 miles. While the EV made it with juice to spare, the chargers at the second location were down, and the 350 kW charger wasn’t working as advertised.

The story remained the same as the trip wore on, but the Lucid Air still pulled it off more quickly than any of the rivals that were tested last year. Imagine how quickly this long-range EV could have completed the 1,000-mile loop if the charging infrastructure was working correctly.