Lotus Emira teased yet again, to be revealed next week – paultan.org 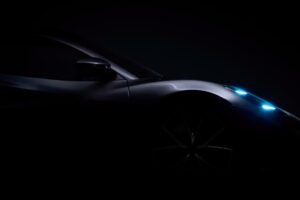 Less than a week to go until the Lotus Emira is revealed in full, but Hethel has still found time to release one last teaser. This image gives us our best look yet at the firm’s important new sports car, which will make its debut on July 6.

As you can see, the car features a low front end with shapely front fenders, housing the large Y-spoke alloy wheels and complementing the steeply rising shoulder line. You can also just about spot the Evija-aping vertical headlights with their double LED daytime running lights, while the short nose all but confirms that the car will be mid-engined, like most Lotus models. The Emira is a big deal as it is the first clean-sheet series-production Lotus in over the decade, replacing the company’s entire extant range that consists of the soon-to-be-discontinued Elise, Exige and Evora. It will complement the insane 2,000 PS Evija electric hypercar and will be built alongside the latter at the revitalised Hethel plant.

The Emira will also be Lotus’ last pure petrol-powered sports car, built on a new extruded aluminium structure and motivated by a “highly efficient” and “cutting edge” engine from a new partner. We’re expecting the 2.0 litre turbocharged four-cylinder from Volvo, another Geely subsidiary, with the Toyota-sourced 2GR-FE 3.5 litre supercharged V6 from the Exige and Evora also reportedly on the cards.