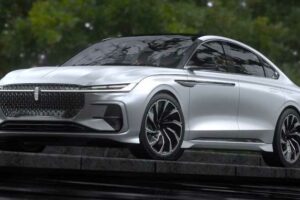 Lincoln will introduce four new electric vehicles, the first of which is to debut next year in celebration of the American luxury brand’s 100th anniversary. Lincoln plans to electrify its entire portfolio by 2030. These Lincoln EVs will be global vehicles, too, with the brand planning to sell its forthcoming electric models in the United States and China.

The four electric Lincolns will be derived from Ford’s new rear-wheel/all-wheel-drive electric vehicle platform, meaning not a single one of these luxury models will share the architecture used by the 2021 Ford Mustang Mach-E. Once the four anchor EVs are in production, the flexible EV architecture can spit out derivatives.

These new Lincoln EVs will no doubt be crossovers. Think Lincoln Corsair, Nautilus, Aviator, and Navigator, but propelled by batteries and electric motors instead of gasoline and internal combustion engines. Lincoln currently has no all-electric vehicles but does have plug-in gasoline-electric hybrid versions of the Aviator and—soon—the Corsair.

Ford recently confirmed there will soon be battery electric variants of the Lincoln Aviator and Ford Explorer three-row SUVs. Joy Falotico, president of Lincoln, would not confirm that the EV we will see next year is the Aviator. Forecasters and media reports have said an electric Lincoln Corsair is not due until 2026 when it will be assembled at the Oakville, Ontario plant that will eventually make five different EVs for Ford.

EVs will represent half of Lincoln’s global volume by 2025, as part of the larger Ford+ plan. The automaker is investing $30 billion toward electrification by 2025. This includes EVs for both the Ford and Lincoln brands, retooling plants, and the development and manufacturing of battery cells, as well as other components, for electric vehicles.

Lincoln is stepping up its EV game because the adoption rate of EVs by buyers of luxury vehicles is higher than that of mainstream ones, Falotico said. The overall EV share in the U.S. makes up around 2 percent of total sales, whereas the share of EV sales in the luxury segment is closer to 19 percent. To further cement its role as an EV brand, Ford’s luxury marque will also introduce the Lincoln Charging Network that pulls together partners such as Electrify America to create a broader network of choice, which ought to make it easier to find a place to charge using the Lincoln Way app.

Ford has developed an electric luxury sedan, but it is for China only. Lincoln showed the Zephyr Reflection concept earlier this year at the Shanghai show, with the production model due to launch next year. Sedan sales have been in decline in North America for years, but in China sedans still account for more than 50 percent of sales and remain a growth segment.

There are no plans to offer the Zephyr in the U.S. That said, the Zephyr’s styling cues will carry over to the new U.S.-bound EVs Lincoln has in the works.

Future electric Lincolns will also feature more spacious interiors with clever storage spaces. Screens are all the rage right now, and future Lincolns will have what the brand calls “coast-to-coast” displays that will use color and light to create a mood, not to mention display various vehicle information.

Additionally, Lincoln is continuing to focus on the premium experience of buying and owning one of its luxury cars, and its efforts to do so are just getting started. The new Lincoln Intelligence System will enable an always-on relationship with clients, Falotico said. The Lincoln Intelligence System is a cloud-based platform designed to keep customers connected with the brand, as well as receive performance updates for their vehicles.

Meanwhile, Lincoln Enhance over-the-air software updates begin this summer, and—as its name suggests—serve as a way to continually enhance Lincoln vehicles. The first OTA is for the Nautilus, which will receive enhancements to its navigation system, Apple CarPlay system, and a digital owner’s manual. A second update to improve the Alexa digital assistant arrives this fall.

Lincoln will also get the best of Ford’s technology. This includes Lincoln’s ActiveGlide hands-free driver assist technology, which is analogous to Ford’s BlueCruise.

Lincoln Way was developed for the digital-savvy China market, offering personalized services and benefits. It is being adapted for the U.S. market so customers can go online to buy and service their vehicle if they do not want to go to the dealership.