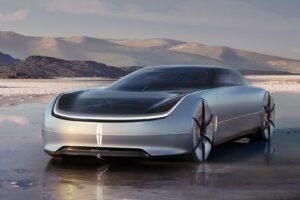 Lincoln has unveiled the futuristic Model L100 Concept at the Pebble Beach Concours d’Elegance, mixing aero-influenced styling and advanced technology into a vehicle that tries to anticipate “the immersive interior sanctuary of tomorrow.”

Marking the 100th anniversary of the 1922 Model L, the brand’s first luxury vehicle, the Model L100 Concept takes inspiration from the company’s design heritage while advancing its vision for mobility in the future.

Lincoln says the all-electric Model L100 Concept pushes the boundaries of the brand’s Quiet Flight design, and we have to agree that it goes one step further into the future than the Lincoln Star Concept unveiled in April this year. As the automaker puts it, the Model L100 Concept “embraces the tension between exuberant elegance and subtle restraint,” which is a quite accurate description.

The vehicle is difficult to categorize, as its sleek, aerodynamic body looks like a cross between a grand tourer and a shooting brake. Striking elements include the low to the ground aero-shaped design, K-tail that guides the air over the vehicle, clean surfaces and smart wheel covers that utilize lighting and sensors to communicate motion, battery life and human presence.

The transparent hood is another eye-catching element and it hides a crystal greyhound hood ornament that captures depth and illumination. Originally selected by Edsel Ford in the 1920s, the ornament symbolizes grace, elegance and speed.

“This concept allowed us to design a new experience that is unburdened by past limitations and represents an evolution of our Quiet Flight tenets. The ultimate expression of our Model L100 design is one that moves effortlessly – a vehicle that appears to be sculpted by the wind, as if friction does not exist.”

Two massive rear-hinged doors open on the sides and a glass roof lifts upward entirely, exposing the lounge-like 2+2 interior as part of the Lincoln Embrace welcoming sequence. There’s no steering wheel in sight as the Lincoln L100 Concept is a fully autonomous vehicle that”s said to offer an intelligent driving experience, connectivity and software-driven innovations.

The key interior detail is an interactive, center console chessboard that features a jewel-inspired chess piece controller that captures light and depth by redefining the vehicle controls inside the cabin.

This controller replaces the traditional steering wheel, making the vehicle experience intuitive and effortless. The two rows of seats allow for driver-centric and social seating configurations, with the transformable environment creating a more accommodating setting and giving the feeling of a true third space.

Another striking feature is the digital floor, which works in harmony with the canopy and ambient lighting to create a personalized experience that can enhance the passengers’ mood. Designers created the Model L100 cabin with animal-free materials and luxury alternatives such as accents of amethyst in recycled suede fabric.

Unfortunately, Lincoln does not reveal much about the concept’s all-electric powertrain. The Model L100 is said to use next generation battery cell and pack technologies, “which will deliver game changing energy density and enable efficient, structural integration by treating the entire vehicle as a system.”

It’s safe to say that we won’t see a production model inspired by this concept anytime soon, but some of its design features may inspire future models. Lincoln’s first production EV will be unveiled this year and it’s expected to be the brand’s version of the Ford Mustang Mach-E.