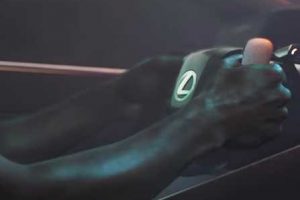 Lexus will be unveiling a new concept car this week, a four-seater that will feature a steering yoke in place of a conventional wheel, such as seen in the facelifted Tesla Model S and Model X. This concept is expected to feature Direct4 Wheel Drive Force Control technology, that is an electric drive control system for Lexus’ next-generation of electric and hybrid models.

A four-seater layout will provide accommodation in the concept, with what appears to be a battery pack making up most of the vehicle’s wheelbase. More of the concept’s design and styling cues will be unveiled at its debut, and given the LF-30 concept that was the first of the Lexus Electrified brand direction, this forthcoming concept should be no less striking.

Here, a dual-motor driveline is also revealed, with one motor driving each axle. The Direct4 Wheel Drive Force Control system manages the delivery of drive torque between the front and rear axle motors in order to ensure optimum traction.

The Direct4 driveline aims to give the driver “a genuine sense of being fully connected with the vehicle,” Lexus said of the system last year, and the system is said to provide an ideal balance of predictability and excitement, with linear acceleration, exhilarating cornering plus quietness and comfort that is key to Lexus’ DNA, it said.

This system has also been designed for future hybrid models, in which an engine with hybrid transmission features at the front of the vehicle, while the rear will get an electric drive axle.

The unveiling of the Direct4 system last December was accompanied by a video where the system was demonstrated in development vehicles based on current-generation chassis, though the drive system will be deployed in future, e-TNGA-based models.