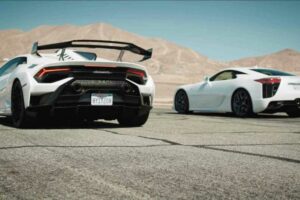 Comparing modern supercars against the top-tier models from a few years ago lets us see the technical progress of these machines. The comparison in this video is particularly entertaining because both models have naturally aspirated V10 engines that sound amazing. It’s a Lexus LFA versus a Lamborghini Huracan STO.

These days, a Lexus LFA can easily command over $1 million. Given their value, seeming one drag racing is a rarity, which is another factor that makes this video so exciting. Plus, its 4.8-liter naturally aspirated V10 is among the best sounding engines ever in a road-legal vehicle. The mill has a 9,000-rpm redline and wails like a banshee when spinning that quickly.

The powerplant makes 552 horsepower (412 kilowatts) and 354 pound-feet (480 Newton-meters) of torque. The gearbox is a six-speed automated manual.

The Huracan STO (Super Trofeo Omologata) is a track-focused supercar that you can also drive on the street. It has a dry weight of just 2,951 pounds (1,339 kilograms) thanks to a variety of tweaks, including more than 75 percent of the bodywork being carbon fiber.

The Lexus LFA’s clutch is a bit fragile and very expensive to replace, so the drivers don’t use launch control for these races.

First, there’s a drag race with odd results because the LFA takes the lead from the start and manages to cross the line first. The Lamborghini driver thinks that everything is in the proper mode, but for some reason, the gearbox is shifting well before the redline.

They then re-run the race, but this time the Huracan STO is in manual shifting mode. There’s a huge difference, and the Lamborghini rockets away for an easy victory.

Finally, they race from a roll. The video doesn’t specify the speed at the start, but it doesn’t matter. The Huracan takes another easy victory. This is the best-sounding race of the bunch because of both V10s screaming together.