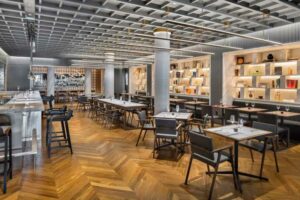 Automakers enjoy expanding their brand beyond the automotive sector. Sometimes that entails launching a clothing line or a series of branded home accessories. For Lexus, that meant opening a restaurant called Intersect by Lexus in New York City in late 2018. However, after just over three years of operation, the eatery is closing its doors, according to Eater.

Lexus opened the 16,500-square-foot Intersect in New York’s Meatpacking District, which, according to Eater, is near similar pop-up spots for Mercedes and Genesis. Ferrari announced last year that it would also enter the eatery space by relaunching the Il Cavallino. It’s the restaurant where company founder Enzo Ferrari regularly dined with friends.

Lexus’ Tokyo location remains open, and its Dubai store is undergoing renovations. It is set to open later this month. Intersect’s 55 employees will have an opportunity to find other positions within Union Square Hospitality Group as the company currently has 211 open positions.

It’s a bit strange and kitschy to see automakers open restaurants or start clothing lines, but brand awareness matters, and there are more distractions than ever competing for our attention and our dollars. Automakers have become much more enamored with the idea of giving customers meaningful experiences and services, and that has seen brands like Lexus, Ferrari, Mercedes, and others, branch out beyond the factory for the kitchen.