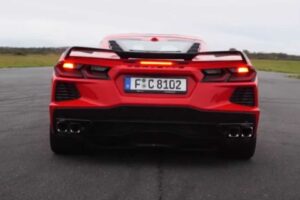 Even the entry-level Chevrolet Corvette C8, when equipped with the Z51 Performance Package, can accelerate from a standstill to 60 miles per hour (0-96 kilometers per hour) in an amazing 2.9 seconds. This holds true for the American version of the supercar, though, as the Corvette C8 has slightly less power for the European market. Accordingly, it is slightly slower in the sprint.

To draw a better picture of the Euro-spec Corvette’s performance, the Motorsport Magazine channel on YouTube tested the C8 Stingray. Its short video, attached at the top of this page, contains most of the vital acceleration figures you’ll need if you are shopping for a new ‘Vette on the Old continent. Here are the numbers.

As a final note, just recently, the new and more powerful Corvette Z06 proved it is a seriously capable machine. A leaked photo showing a Chevy product display board revealed a quarter-mile time of 10.6 seconds, which is truly impressive.