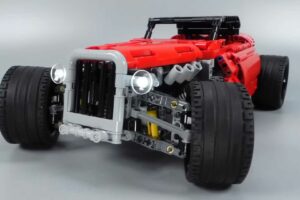 Legos are more than just toys for curious kids. The plastic building bricks are a blank slate, a versatile tool for endless creativity. Lego, the company, has embraced the automobile with intricate kits of iconic and new machines, but a new video from the Brick Technology YouTube video channel shows the bricks’ versatility by creating a working Lego RC hot rod with a four-speed gearbox and complex clutch assembly.

The video packs a lot into just eight minutes, beginning with assembling the gearbox. The build becomes complicated very quickly, with a simple two-speed gearbox growing into a four-speed unit. The next step is to design the shifter, which utilizes a 90-degree stepper mechanism, a shifter mechanism, and a 180-degree servo motor. The clutch assembly is next in the design process, and a thermal view of the build reveals a large amount of heat coming from the clutch plate, just like a real car.

The next step in the video puts it all together, pairing the engine to the clutch, which is linked to the four-speed gearbox and shifter. This is where the build starts to feel like an RC car, with a PlayStation controller controlling the various vehicle mechanics – clutch, acceleration, upshift, and downshift. It’s cool to see all the intricately moving parts, but it’s still not a proper RC car yet.

Everything gets combined into a singular and compact chassis, but the build also receives a working suspension. The final bit of the build is the body, which looks like a cross between a generic hot rod and the Chrysler Prowler. It looks fantastic, with working headlights and taillights, although there isn’t much of a cabin with the mechanicals taking up most of the space.

The video ends with the hot rod Lego RC car driving around, demonstrating its suspension and tow capacity. It can tow a large water bottle, which is made easier with its four-speed gearbox. It’s a neat build that could easily entertain children and the child in all of us for endless hours. Lego is taking notice, too.