Lego Five-Speed Transmission Build With Dyno Is An Engineering Marvel 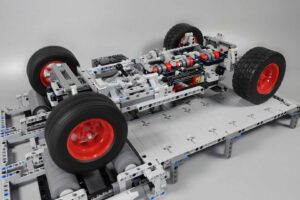 Lego is no stranger to creating exciting car kits for enthusiasts to enjoy much like this Bugatti Chiron set.

Brick Technology starts out the build with a very simple two-speed transmission driven by an electric motor. From there, the transmission build gets into full swing as two more gear sets are added. This leads to a total of 5 speeds that follow a normal manual transmission layout. Once the guts of the transmission were complete, it was time to work on a shifter.

Building the shifter for the newly minted Lego transmission required some trial and error by Brick Technology. For starters, there was a lot of slop in the transmission that would make it difficult for clean shits and would surely draw negative feedback from the lego automotive journalists. To combat this slop, reinforcing pieces were added that eventually lead to a very precise and tight transmission.

The shifter was then added to the transmission where Brick Technology tested out the shift action. During testing, the shifter got stuck due to the length of the throw. Thankfully Brick Technology added in a Lego short shift kit which remedied this issue.

With the forward gears in working order, it was time to tackle reverse. This part of the build was a unique opportunity to learn how reverse gears are built using a combination of input and output gears to move a car backward.

Now that the transmission was complete it was hooked up to a Lego dyno to power its power output. The dynamometer build alone is a unique look at the engineering behind the machines that make YouTube cars famous.

The completed Lego build is run through its final test on the dyno shifting between all five years and reverse while at full speed. This final test showcases the robust build quality of this fully functional Lego 5-speed transmission. This might be the most intricate lego engineering build we’ve seen since Lego built a full sized functioning Bugatti Chiron.