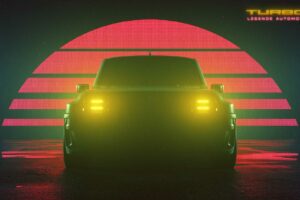 The new company wants to be for the Renault 5 Turbo what Singer is for the Porsche 911.

The Renault 5 wasn’t one of the most exciting cars ever produced by the French automaker, but the Turbo 1 homologation special was an entirely different beast. The most powerful French car at its launch, the hot hatch eschewed the front-engined, front-wheel-drive layout of the regular supermini and opted for a mid-engined, rear-wheel-drive setup.

The more common Renault 5 Turbo 2 followed, and while it felt less special, it was still a remarkable little hatchback with the same 160-horsepower engine as the original. It had slightly less torque (155 lb-ft vs 163 lb-ft) and put on quite a lot of weight (970 kg vs 900 kg) after replacing many of the light-alloy parts, but managed to remain a quintessential hot hatch.

Fast forward to 2021 and prepare to meet the Turbo 3, a natural evolution of the 1980s rally car. While it doesn’t come straight from Renault, the newly formed Legende Automobiles wants to pay tribute to the feisty French machine with a modern-day interpretation without diminishing the attributes that made the original version so special.

Company founder Alan Derosier originally intended to work on the Porsche 911, but knowing that segment of the market is well-covered by the likes of Singer and co., he decided to channel his efforts towards his other childhood hero – the Renault 5 Turbo. A couple of teaser images have been released, sending out a 1980s vibe while giving us a glimpse of what has been labeled as the Turbo 3 version.

Beefy fenders at the front and rear along with a large wing suggest the tiny mid-engined hatchback has taken a heavy dose of steroids while adopting modern LED lighting. Legende Automobiles’ Turbo 3 boasts a pair of square exhaust tips incorporated in a wide rear diffuser while the front end has air ducts through which we can observe the wide wheels.

The restomodded 5 Turbo will be unveiled shortly, and while Renault won’t be coming out with a mid-engined supermini anytime soon, it is bringing back the 5. It’ll eschew the combustion engine for a pure EV setup and will spawn a high-performance Alpine version to echo what was one of the first hot hatches – the 1976 Renault 5 Alpine (Gordini / Copa in other markets).