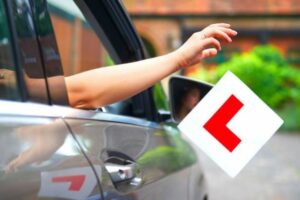 Ian McIntosh, CEO of RED Driving School said there was an “appetite” among learner drivers to “go green”. He said there was a “demand” in favour of learning in a manual car but experts predicted this would change in the “long term”.

He said: “There is clearly an appetite amongst learner drivers to go green in the not-so-distant future, and there is a general willingness amongst those surveyed to pay a premium.

Consumer demand at the moment is still massively in favour of learning to drive and passing the driving test in a manual car.

There are also a few teething problems regarding EV adoption – particularly when it comes to learning in a hybrid or EV.

“For example, the domestic and public charging infrastructure that’s required to power vehicles that are working all day on a full-time basis can be challenging.

“But, as the market shifts towards EVs, the long-term shift to automatic transmission vehicles is inevitable.”

A new poll by RED Driving School, Michelin and KwikFit found 90 percent of young drivers think they will own an electric car within 10 years.

Meanwhile, 78 percent of learner drivers would consider paying a premium for electric vehicles as they supported them so much.

A massive 56 percent said they would be prepared to pay over £1,000 more if they could secure an electric model.

Just under half of learners support the Government’s ban on the sale of petrol and diesel cars by 2030.

They believe the update was a “timely change” on the road as more started to switch to electric models.

However, 71 percent of learner drivers said they planned to own their first car outright which could be a barrier for EV adoption.

Shared ownership and lease deals were not so popular with just 20 percent saying they would consider this.