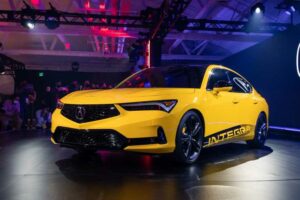 Like it or not, it was hard to miss the 2023 Acura Integra Prototype that debuted last year in its Yellow Pearl paint job. That prototype is now going into production—and being revealed soon in salable form— though it might not get that striking yellow color as an option immediately, according to alleged leaked details on the IntegraTalk forums.

Details gathered from screenshots of a dealer ordering guide—if accurate—may reveal the upcoming Integra’s trim and specifications ahead of orders opening later this week, on March 10. Here’s what the forum-leaked order guide shows:

The 2023 Integra will come in base, A-Spec, and A-Spec Tech trim levels, with a continuously variable automatic transmission (CVT) listed as standard and a six-speed manual option only listed as available for the top-of-the-line A-Spec Tech trim, according to the screenshots. It doesn’t appear that the company’s available 10-speed automatic transmission will be an option on launch, either.

The CVT is here because in all likelihood it’s the very same transmission utilized in the mechanically related Honda Civic. It’s even paired with the Honda’s same 1.5-liter turbocharged I-4 engine. Power figures for the new Integra have yet to be announced, but we anticipate an output of at least around 200 horsepower, meaning the Acura will use the the 200-ish hp version of the 1.5-liter turbo four used by the sportier Civic Si.

The forum posts also offer a look at the upcoming Integra’s paint options, and sadly there doesn’t appear to be any yellow option (yet), despite the Integra prototype debuting in a bright yellow color. The paint options that are listed include Platinum White, Lunar Silver, Performance Red, Liquid Carbon, Majestic Black, and Apex Blue.

We may just be looking at partial information and there could be more options at launch, or it’s plausible that Acura is holding back the yellow for an upcoming Integra Type S model that surely will follow the regular-grade version. The company recently trademarked the name and has been Type S’ing numerous nameplates in its lineup, including the TLX sedan, MDX SUV, and NSX supercar.

If this order guide is accurate, you can’t quite order the car that Acura debuted in prototype guise last year. You can order something close, in another color. Oh, and you will also have to upgrade to the highest available trim level if do not want the CVT.

That may not be what Acura fans had hoped for—a second coming of the brands’ premium sport compact formula distinct from a regular Honda—but at the end of the day, there’s still a new turbocharged, manual-transmission Integra just around the corner that isn’t a crossover or an EV. Maybe that’s something. We’ll be able to confirm full details on the Integra’s available options when ordering begins March 10.