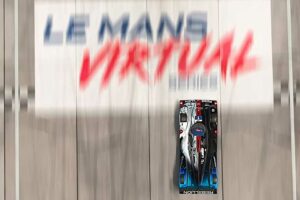 At the start, Erhan Jajovski for R8G Esports started on the LMP pole position, after a track limits violation pushed Marcell Csincsik for GPX Rebellion Esports down to second. It was a lead that Jajovski held on to all through the first half of the race, completing his maximum seat time in one session.

GPX Rebellion Esports didn’t let R8G out of its sights, however, and as the second half of the race kicked into action, Jajovski had handed over the leading car to Gordon Mutch, with Jiri Toman taking over from Csincsik in the chasing #22. He wasn’t in that position for long, making a successful move for first at Hairpin Turn.

Next to pass Mutch was Michal Smidl in the Monza round-winning #70 Realteam Hydrogen Redline entry, this time over the bumps at Sunset Bend. This was after he’d battled with Michi Hoyer in the Alpha Industries ByKolles-Burst car for third, who was showcasing to the world his defensive expertise – eventually ceding in lapped traffic.

When the next pitstops took place, DTM driver Daniel Juncadella took the reins from Smidl, and Mutch handed across to Isaac Price – making a one-off appearance for R8G. Price closed in on the #70 car, and retook second place with a decisive move into Turn Two.

2021 GT World Challenge Europe Esports Sprint Series champion James Baldwin was scything his way through the field thanks to an aggressive tyre strategy that meant switching tyres at each stop when everyone around was double-stinting. Quick, but losing track position was ill-advised and the YAS HEAT entry eventually finished in seventh place.

With an hour left on the clock, 2020 Nürburgring Langstrecken-Serie champion David Pittard led the race, but Price had closed him down and snatched the lead, only for Wisniewski to overtake both cars for first almost immediately. The #1 Rebellion GPX Esports car was ahead for the first time in the race.

Having slipped to third, Pittard then found the barrier at Sunset Bend, losing his rear wing and the chance of a podium finish.

The overall race victory was sewn up, however, the hard work done in the middle section of the race for the #1 car, expertly balancing speed and consumption. 2021 Super TC2000 touring car champion Agustin Canapino and 2020 24 Hours of Le Mans Virtual winners Nikodem Wisniewski and Kuba Brzezinski had taken their first win in the new championship.

R8G Esports crossed the line in second, Isaac Price putting in a notable drive as a last-minute stand-in, with Realteam Hydrogen Redline rounding out the podium. MAHLE RACING TEAM had its best race to date, securing fifth behind Floyd ByKolles-Burst.

Drama befell the championship-leading #123 Team Redline entry, Bono Huis receiving a drivethrough penalty after making contact with the #888 Tesla R8G Esports BMW, but fighting back to sixth after a stirring drive by Felix Rosenqvist.

In the GTE category, Kevin Siggy lead the pack in the #71 BMW Team Redline M8 after being quickest in qualifying, but was overhauled by Joshua Rogers in the #92 on the first lap. Thus began a game of cat and mouse between the fuel-saving BMW and the two Porsche Esports cars. A recurring theme throughout the season so far.

After starring in the early phases of the race with a charging Jordy Zwiers at the helm, soon after the halfway marker, the #51 Ferrari Driver Academy 488 was handed over to 2021 Endurance Trophy for GTE Am Drivers champion Nicklas Nielsen.

Unfortunately, he was tipped into a spin by BMW Team GB driver Martin Stefanko at Hairpin Turn 83 laps into the race. Nielsen then made contact with the Panis Racing LMP, receiving a drivethrough penalty. Stefanko also received the same forfeit for his part in a scruffy lap.

A subdued GTE race was largely dominated by the different strategies of the Porsche and BMW teams, a clear picture of form only emerging within the final minutes. On lap 126, Tommy Østgaard in the #92 Porsche served a drivethrough penalty for pitlane speeding, meaning it was a straight fight to the end between the #71 BMW and #91 Porsche.

In the end, BMW Team Redline’s unique strategy that enabled them to save fuel over and above even other BMWs prevailed. The #91 Porsche finished second, with 2021 British GT champion Dennis Lind crossing the line in third for Red Bull Racing Esports, only to drop to seventh as a result of a time penalty – Nestor Garcia staying in the car for too long.