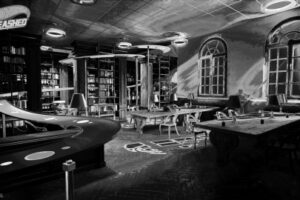 The latest trailer for Hot Wheels Unleashed has revealed another one of the game’s six environments and more of the diecast model cars players can race this September.

We’ve previously seen the Garage and Skyscraper environments, so today’s reveal of the College Campus environment means we’ve now had a look at half of the game’s location offerings.

While the previous environments were large areas based around the same basic theme, the College Campus runs through four different rooms. Set in an American higher education institute, there’s a library, a classroom, and a chemistry lab, all with their own obstacles and plenty of platforms for the famous orange Hot Wheels track.

Connecting the three main rooms is a hallway, and courses aren’t just restricted to the floor and surfaces here. There’s also ventilation ducting on the ceiling which runs through the other rooms too.

As well as the courses the game will feature — 40 across the six environments — players will be able to create their own with the Track Editor, which Milestone says gives “unprecedented level of control”.

Hot Wheels Unleashed will include more than 60 different car models at launch, with more coming via DLC, and today’s trailer reveals another seven. Exotique, Power Rocket, Skull Crusher, Street Wiener, Tankanator, Total Disposal, and Winning Formula all appear in the trailer and are confirmed for the game at launch. Yes, there’s really a car called “Street Wiener”.

The game will launch on September 30 across PlayStation 4 and 5, Xbox One and Series, Nintendo Switch, and PC via Steam and Epic.