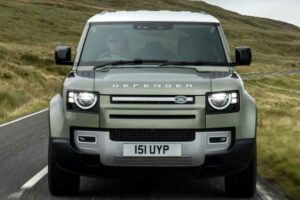 Hydrogen, in the abstract, seems like the fuel of the future. When used in a typical fuel cell, the byproducts of the reactions inside the cell (not the means by which the hydrogen is produced, necessarily) are delightfully carbon neutral: electricity, used to power the vehicle, and pure water—which in the Mirai, for example, is expelled from a little pipe underneath.

That gives hydrogen significant appeal in the era of emerging carbon consciousness, especially for an automaker like Jaguar (which will go all-electric by 2025, it promises) and its sibling Land Rover (which aims to eliminate tailpipe emissions by 2036). That’s one of the reasons why Land Rover may be exploring hydrogen fuel cell technology in this new Defender prototype.

Land Rover sees the technology as complementary to regular BEVs, and that’s largely true. Hydrogen fuel cell electric vehicles (FCEVs) benefit from rapid refueling, storing their energy in lightweight compressed hydrogen rather than heavy and slow-to-recharge batteries. Of course, the challenges are myriad: Hydrogen is explosive, hard to contain, and doesn’t have the infrastructure on the ground currently to support retail sales except for a few limited markets. Generating hydrogen fuel, too, is energy intensive and expensive (for now).

We think that may change in the near future, but either way, Land Rover wants to explore the technology, and so does the U.K. ‘s Advanced Propulsion Center, which has funded the project. A Defender fitted with the new system will start testing in 2021, and Land Rover’s engineers will evaluate how it stands up to typical Defender use cases, like refueling, towing, off-roading, and long trips.

The company has brought a consortium of partners along for the ride to help with related sub-technologies like cooling (Marelli) and battery storage. Land Rover is also hoping that the Defender FCEV will provide good low-temperature performance, an area where conventional EVs sometimes struggle.

This doesn’t herald a production Defender FCEV anytime soon, so don’t expect to see one of these refueling next to a Toyota Mirai in California at one of the few hydrogen refueling stations in the U.S. But as technology develops in both powertrains and infrastructure, perhaps hydrogen will become a more tenable fuel source that gets more traction globally.