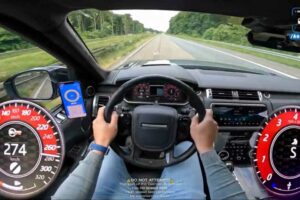 The next-generation Land Rover Range Rover Sport SVR hasn’t debuted yet, but the previous example is still a potent performance powerhouse. A new video from the AutoTopNL channel takes the large SUV to an unrestricted portion of the German Autobahn to see the Land Rover blast down the famous road at triple-digit speeds.

The SVR packs the automaker’s supercharged 5.0-liter V8 engine. It produces 575 horsepower (428 kilowatts) and 516 pound-feet (700 Newton-meters) of torque, which routes the power through an eight-speed transmission to all four wheels.

The SUV tips the scales at around 5,100 pounds (2,313 kilograms), but the Land Rover has no trouble getting up to speed. It calmly cruises down the highway, speedometer ticking upward across multiple high-speed runs. It’s quick through the 124-mph (200-kph) mark, but its acceleration slows as it climbs past 155 mph (250 kph). The Range Rover Sport SVR has a potent engine, but its boxy shape wasn’t designed for all-out speed.

We’ve spotted the next-gen Sport SVR, which will receive new styling inside and out, previewed by the new Range Rover that Land Rover launched last year. It’s rumored to get a new BMW-sourced engine that powers the X5 M. The twin-turbocharged 4.4-liter engine is smaller than the current one, but it could be more powerful, producing around 600 horsepower (447 kilowatts). It’ll be faster, too, capable of hitting 180 mph (290 kph), and sprinting to 62 mph (100 kph) in 4.0 seconds, 0.5 quicker than the current Sport SVR.

The Land Rover Range Rover Sport SVR is fast for being so large and luxurious, but it’s the norm today. The Sport SVR has to compete against potent adversaries like the BMW X5 M and the Porsche Cayenne Turbo. The next-generation model will have its work cut out for it.