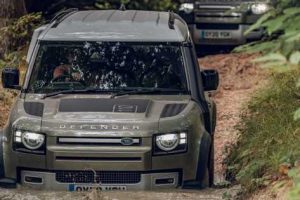 As time passed following the reveal of the new Land Rover Defender, I became less sure with the way it looked. Yes, a 90 on steelies is a joyous sight to behold, but what most people will buy – a 110 with big alloys – was something I wasn’t sure quite worked.

It seemed too rounded and soft-looking, and too big a departure for the beloved original. If Mercedes could remake a G-Wagen that looked almost entirely the same as the old one, why can’t Land Rover? And since then we’ve had the new Ford Bronco, a vehicle that brilliantly brings the styling of the 60s original into the 21st century. It only takes a few minutes with the Defender 110 in the metal, though, for you to warm to it.

Even if some of the details of the Adventure pack fitted to ‘our’ test car like the ‘gear carrier’ (which it turns out is a little fiddly to lock and unlock) are a bit try-hard, the 110 hits the spot on first viewing. It looks pleasingly different to anything else Land Rover makes right now, and it only gets better on the inside. Here, exposed screw heads, a chunky magnesium alloy dashboard (which is part of the car’s structure) and a big steering wheel add a sense of purpose to proceedings.

Again, I wasn’t sure in the photos, but when you sit in it, you wouldn’t have it any other way. And despite the emphasis on ruggedness in there, the tech is first-rate; the new infotainment system is brilliant, and a world away from the shonky stuff JLR was using not that long ago. The rearview mirror meanwhile is a screen, displaying a feed from a rear-mounted camera.

On the move, the Defender has the kind of road manners the old one could only dream about. The ‘240’ 237bhp, 317lb ft inline-four twin-turbodiesel is a bit noisy under load, but otherwise, the Landy is quiet and refined. Save for the occasional shake over rougher ground (this is a tall SUV on giant wheels, remember), it rides well too. And it corners.

There’s a reasonable amount of body roll, of course, and you don’t have to push that hard for understeer to happen. But it does way more than it needs to on the tarmac, while still avoiding trying to be something it isn’t; the slow steering confirms that Land Rover isn’t trying to make the Defender drive like it’s a car.

The reason the Defender can do all this is down to what’s under the skin. Gone is the ladder frame and binned are the solid axles. The new one is built around the ‘D7x’ aluminium monocoque and has fully independent suspension using coil or air springs. This doesn’t mean it’s gone soft though, as we discovered thanks to a mud-plugging trip to Eastnor Castle, Land Rover’s favoured proving ground for mucky, axle-flexing silliness.

A simple button push engages the low-range gearbox, which activates the off-road mode for the air suspension, giving 300mm of ground clearance (40mm higher than the old Defender). The approach, departure and breakover angles are 38, 40 and 28 degrees respectively, compared to 44, 27.8 and 37 in a Jeep Wrangler Rubicon, which has a 30mm lower ride height.

Although it’s worth pointing out that Land Rover wouldn’t send us down a route the Defender can’t handle, our route at Eastnor was tough-going, with deep ruts and an abundance of muddy slop. The 110 just makes it all feel very easy; you just switch the Terrain Response system to Mud and Ruts, set the hill descent to a sensible speed, and away you go. It’s all just shrugged off.

All Defenders from our trip made it through entirely unscathed, and were ready for the road drive back to the end of the test drive at JLR’s Fen End’s test facility, requiring no more than a hose down. The drive back was as remarkably unremarkable as the first; a gentle waft down the motorway in something that didn’t feel like it was up to its arches in mud less than an hour ago.

A Wrangler, though, which can’t do the on-road stuff anywhere near as well as the Defender, isn’t much less. It’s worth pointing out that a Discovery isn’t that much more than a Defender, but that opens up another can of worms; there’s quite a bit of crossover between the two, and the latter very much feels like it’s occupying the space left by the former when it was pushed up market.

That’s quite an appealing thing; something which works as a luxury vehicle but is still, with its hoseable rubber floor mats and rugged sensibilities, tough enough for rough treatment. And for those bleating on about what farmers will buy – A) that’s not a very big market and B) if they aren’t already set on a pick-up truck, there’s always the simplistic, £35,000 Commercial version to consider.

Replacing an icon like the Defender was never going to be easy; it’s no wonder it’s taken Land Rover so damn long. The end result is something which isn’t going to be universally loved off the bat. But given time, it should win over the most ardent of purists. It’s certainly good enough to manage that.