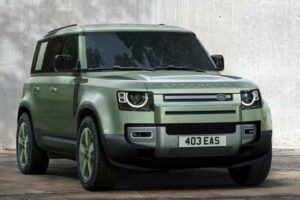 There are few long-lasting iconic cars still in production, and the Defender is certainly one of them. Land Rover introduced the Series I at the Amsterdam Motor Show back in 1948, which means the off-roader will be celebrating its 75th anniversary next year. To mark the upcoming important milestone, the British marque owned by Tata Motors is launching a limited-run model available in the two-door 90 and four-door 110 flavors, but not the new 130.

The go-anywhere SUV comes painted in Grasmere Green, which extends to the wheels as well as inside the cabin for the dashboard and door cards. To set it apart from the regular Defender, Land Rover also applies a special “75 Years” sticker on the tailgate below the handle. Those seats come wrapped in what LR refers to as Resist Ebony while the center console is covered in a Robustec material claimed to be the most robust fabric available for the vehicle.

The Defender 75th Limited Edition is based on the generously equipped HSE trim level, meaning you get a wide array of goodies. These include matrix LED headlights, a 360-view camera, head-up display, wireless smartphone charger, three-zone climate control, memory seats, and the 11.4-inch Pivi Pro infotainment. It comes as standard with a folding fabric roof but you can optionally switch to a sliding panoramic top. As expected, the configurable Terrain Response is part of the deal as well.

Land Rover will sell the limited-run Defender with additional options including an electrically deployable tow bar and all-season tires. There aren’t any changes underneath the hood where the rugged SUV retains the P400 gasoline and D300 diesel mild-hybrid engines joined by the P400e plug-in hybrid powertrain.

Math starts at £85,995 at home in the UK for the Defender 90 and from £89,995 for the 110. Coinciding with the special edition’s launch, Land Rover is introducing a Lifestyle Collection that carries over the Grasmere Green theme. There’s no word on how many will be made, but LR is already taking orders from early adopters eager to get behind the wheel of the anniversary model.