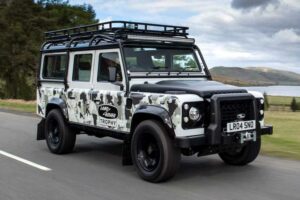 Despite being busy shoving a V8 in the new Defender while adding a bigger three-row 130 version, Land Rover still has time to tinker with the classic model. Although the original boxy off-roader went out of production in 2016, it was briefly resurrected last year by the Land Rover Classic division for a Works V8 Trophy model. The limited-run special edition is getting a follow-up, eschewing the Eastnor Yellow paint for a camouflage-like livery.

Meet the Land Rover Classic Defender Works V8 Trophy II, limited to 25 units available in 90 and 110 Station Wagon body styles, plus also a 110 Double Cap Pick-up that wasn’t offered on last year’s model. While it may look like an arctic camo at a first glance, the all-terrain vehicle has a special finish illustrating 23 locations the Defender has tackled in its 70+ years of history, including places from The Camel Trophy.

As you have probably figured out by now, these vehicles are not entirely new. The 25 units are based on 2012-2016 Defender donor cars, which Land Rover Classic strips down and rebuilds by hand. Power comes from the familiar 5.0-liter V8 engine pushing out 400 hp and 515 Nm (380 lb-ft) of torque sent to both axles through an eight-speed ZF automatic transmission.

Featuring a Fuji White main color with a Narvik Black roof and glossy black accents, the Defender Works V8 Trophy II rides on 18-inch alloy wheels and boasts a 1.27-meter-wide LED light bar on the roof. There’s also a rear-mounted ladder to access the roof rack while the black hood has received a satin finish to diminish glare.

Stepping inside, Land Rover Classic has installed Recaro sports seats wrapped in black and white Windsor leather. There’s more leather to be found on the headliner, door cards, and dashboard. Speaking of which, the dash hosts a modern infotainment system with mobile connectivity and navigation. A bespoke Elliot Brown clock is also installed and you can purchase separately a matching watch limited to 1,000 units.

Those who want the pickup better act fast as only five will be offered, with the other 20 being split equally between the 90 and 110 wagons. While last year’s model had a starting price of £195,000, the new Defender Works V8 Trophy II is considerably more expensive. It retails from £225,000 for a 90 in the UK. That works out to about $274,000 at current exchange rates.