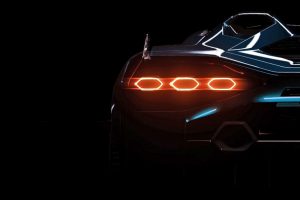 Lamborghini previously announced it would unveil a new model on July 8 and is following that up with a few teasers posted on its Twitter page and official website. These are the first hints of just what the mysterious new car could be, all of which points to a new Spyder (convertible) variant of the Sián FKP 37 that was revealed last year.

The Twitter image shows part of the aero package on the car, particularly one of the winglets found on the rear that looks very much like that on the Sián’s active rear wing. The script seen on the piece roughly translated to “made in Sant’Agata Bolognese,” the place where Lamborghini makes its cars.

If that isn’t enough of a telltale, the second photo of the vehicle’s rear clearly illustrates the Sián’s hexagon-heavy rear, with the shape being used for the taillights and dual exhausts. From this angle, we can also see the reworked rear deck to make way for the removable top, with the rollover protection hoops appearing to be integrated with the highly angular engine cover.

The future is here, and it is unlike anything the world may have seen before. Get ready to witness the official unveiling of our latest creation at 6 PM CEST on July 8th, 2020 on https://t.co/4SLPw939p1, and our YouTube channel.#Lamborghini #AheadofItsTime pic.twitter.com/5yEXz5a3Ye

With the latest teasers, it is safe to say that the SCV12 won’t be the star of upcoming reveal, even though it has been heavily previewed previously before its summer debut. Nonetheless, a Sián Spyder is certainly cause for excitement, especially since the coupe has some impressive figures. Powered by a 6.5 litre NA V12 engine with 785 PS (774 hp), the hardtop’s powertrain is also augmented by an electric motor integrated into the seven-speed ISR (Independent Shifting Rod) gearbox.

Total system output is 819 PS (807 hp) and along with an all-wheel drive system, the setup allows the Sián to get from zero to 100 km/h in 2.8 seconds and will hit a top speed of over 350 km/h. Expect the Spyder version to closely match these figures when it is revealed soon.