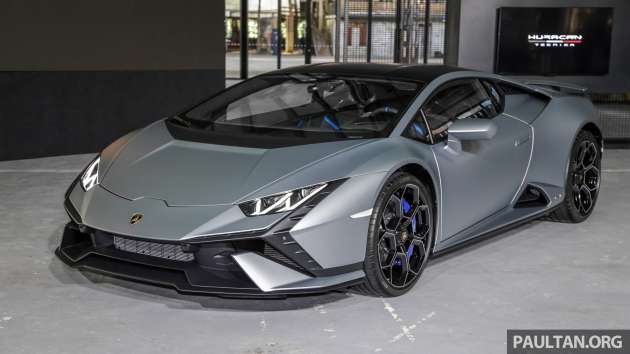 Three months after its world premiere, the Lamborghini Huracán Tecnica has landed in Malaysia. The latest rear-wheel-drive iteration of Sant’Agata Bolognese’s V10 supercar takes the upgraded powertrain from the balls-to-the-wall STO and shoves it into a less extreme package.

Everyone digs Lamborghinis for their rorty naturally-aspirated engines, and this one is no different. The Tecnica’s screaming 5.2 litre ten-cylinder engine puts out 640 PS at 8,000 rpm and 565 Nm of torque at 6,500 rpm – 30 PS and five Newton metres more than the Evo RWD with which it shares its body.

With a seven-speed dual-clutch transmission, the Tecnica fires itself from zero to 100 km/h in just 3.2 seconds, a tenth of a second faster than its more, ahem, pedestrian sibling. It’s also two tenths slower than the STO, but even so, nobody’s going to complain it’s not fast enough.

The narrower Tecnica loses the race car-style widebody of the STO but gains a few aerodynamic bits of its own. The front end has been completely re-profiled, incorporating black Y-shaped bumper corners from the Terzo Millennio concept, along with a new front splitter with lower, open slats that channel air through the wheels, increasing downforce. A lighter aesthetic has been achieved through a black section at the trailing edge of the bonnet, visually extending the windscreen. 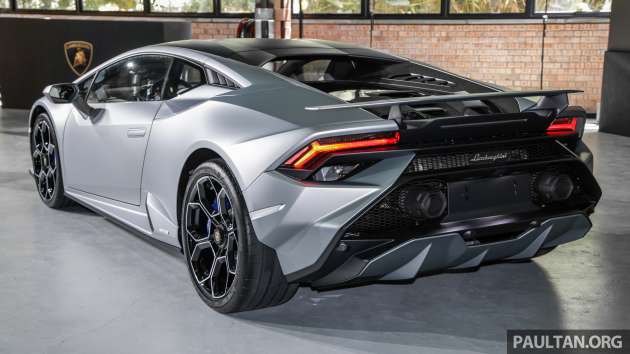 Along the side, the redesigned rear quarter panels allowed the side air intakes to be pushed rearward. In turn, the side window graphic has been extended via slatted panels, mirroring the Essenza SCV12 track car. The rear end is dominated by a bulging centre section that encompasses the hexagonal twin tailpipes and the large diffuser. A new vertical rear window is said to improve visibility, although a glass engine cover window remains, allowing passersby to peek at the gorgeous V10.

But the most prominent part of the rump is the fixed rear wing, which contributes to a 35% increase in rear downforce compared to the Evo RWD. Drag has also been reduced by 20%, improving aerodynamic balance and stability; there are also underbody air deflectors to improve aero efficiency. Completing the look are new 20-inch Damiso two-tone alloy wheels with a hexagonal design inspired by the Lambo V12 Vision Gran Turismo, wrapped in Bridgestone Potenza Sport tyres.

Lamborghini has also put its recent racing experience in the Tecnica’s brakes, which feature new cooling management to deliver a more consistent braking performance on road and track. There are special cooling deflectors and calliper ducts that draw air into the carbon ceramic discs, lowering brake fluid temperatures and reducing brake fade and pad wear.

Elsewhere, the buyer can specify titanium wheel bolts and rear arches and a lightweight door design – these, along with a carbon fibre bonnet and engine cover, allow the Tecnica to weigh 10 kg less than the Evo RWD, tipping the scales at 1,379 kg dry.

Inside the car, you’ll find revised graphics for the two screens, including simplified instrumentation with an arced rev counter said to enhance legibility. The vertical centre touchscreen also features a number of driver-centric displays, including a real-time LDVI screen. Like the STO, the Tecnica comes with connected telemetry and allows users to keep track of their past destinations and track times via the Unica app.

As you can imagine, the personalisation options are endless and include eight standard colours and over 200 additional hues via the Ad Personam programme. Buyers can also specify unique interior trim and Alcantara options, along with the Tecnica script embroidered into the side bolsters. No local pricing information has been released, but expect it to be stratospheric, as you’d expect from a Lamborghini.