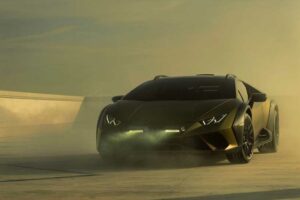 Generally speaking, most folks wouldn’t dare drive a Lamborghini sports car off-road unless they were playing Forza Horizon 5, and even then some might hesitate. And yet, Lamborghini has been working on a “Sterrato” version of its Huracán supercar built specifically for the dirt to strip that pensiveness from real-world operators.

This exciting development has been a long time coming. We drove an early version of the Huracán Sterrato back in 2019 and our own Jonny Lieberman seemed to be quite taken with what he called Lamborghini’s “space buggy.” Since then, Lamborghini has continued to tease the Sterrato to keep potential buyers (and dreamers) on the hook, and now it has peeled the cover off its rugged supercar in its full, production-ready glory.

If you’re wondering why Lamborghini would create an off-road version of a Huracán at all, we would first recommend that you go to dictionary.com and look up the word “fun.” Secondly, legend has it that when the Lamborghini engineering team was working on the Urus SUV, it became quite fond of off-roading and overlanding. Then, one of the lab coats wiped the dust off their goggles and asked “hey, what if we made an off-road Huracán EVO?” Okay, that probably isn’t exactly how that last part happened, but it’s probably close enough.

The end result is the Sterrato, whose name loosely translates to “dirt road.” Fitting, isn’t it? Despite revealing the Huracán Sterrato’s skin, there is still quite a bit that we don’t know about the dirt-going supercar yet. Lamborghini has promised that the Huracán Sterrato will make its full, detailed global debut at the Art Basel in Miami, on November 30th, so we imagine we’ll have more information by then if not sooner.

For now, we can infer that it will likely have the same horsepower and torque as today’s Huracán—630 hp and 442 lb-ft respectively—but we’d like to know more about the Sterrato’s suspension package and if the transmission gearing has been changed at all to accommodate its intended off-road exploits. We can say for sure that Lambo nailed the look: The Sterrato’s combination of the Huracan’s bladelike body, tall ride height, beefy tires, and future-apocalypse-buggy fog lights is just incredible.