Lamborghini Created A Spotify Playlist To Match Music With Its Engines 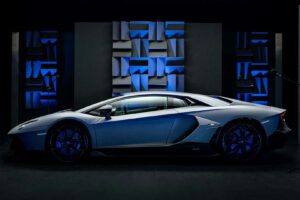 The first successful mass-market in-car radio didn’t arrive until halfway through 1930. What did people listen to before then? Probably lots of wind noise, but the automotive audio landscape has drastically changed since then, with a world’s worth of music now available in our pockets. Lamborghini is using music streaming in a creative way to curate three Spotify playlists designed to enhance the sound of their engines – the V8, V10, and V12.

Lamborghini’s sound engineers collaborated with music producer Alex Trecarichi on the playlists, which went far beyond just adding some favorite songs. Trecarichi applied Fourier Transform formulas to the three engines. This allowed him to fund the basic engine frequencies at ignition (idle), 4,000 rpm, and maximum power.

Through this procedure, Trecarichi discovered the V12’s frequencies. He used the 769-horsepower (574-kilowatt) engine from the Aventador Ultimae, the final iteration of the iconic powertrain. At idle, the engine sings in F-sharp (92.50 Hz). At 4,000 rpm, the note changes to a G (98 Hz), while the engine at max power pumps out a G-Sharp (103.83 Hz). Trecarichi matched each frequency to the key of certain songs, such as Lorenzo Senni’s Canone Infinito (F-sharp), Ben Böhmer’s Run Away (G), and Sam Collins’ We Can All Dance (G-sharp).

Mario Mautone, Lamborghini’s NVH Whole Vehicle Coordinator, associates the V12 sound with the violin. “It’s that raw, metallic echo which is then embodied in the psychoacoustics experience, the chemical and emotional response to the sound wave that our brains transform into positive emotions and memories,” Mautone said.

The 24-track playlists are available on Spotify. Lamborghini had graphic designer Vasjen Katro design the plays list art. Other songs in the V12 playlist include In Like The Rose by Black Rebel Motorcycle Club, Looped by Kiasmos, Arrivals by SUDO, Just Follow by CatzClaw, and several more.

While the car arrived without the radio nearly 120 years ago, it has become a must-have feature today, with automakers installing powerful multi-speaker sound systems and state-of-the-art technology. The availability of music streaming services like Spotify and Apple Music has changed the in-car audio experience, with automakers not even installing CD players. Listen to the V12 playlist here.