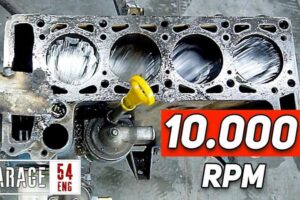 Now this is a good experiment.

Blowing up your engine is never a good thing. That is unless you’re doing it’s on purpose for science. Automotive Youtuber Garage 54 is no stranger to unique automotive experiments, but his latest video is one of our favorites as he spins a cheap Lada engine to over 10,000 RPM to see where its pistons will land after a critical failure.

Engines are designed to work within a specific operating window. The operating window of an affordable family car is very different than a supercar. Normal consumer cars will typically have engines that rev lower as compared to the shrieking high revving engines of the exotic cars that fill bedroom wall posters. So, what happens when you try and make a normal engine rev like a formula one car? Well, the failures are spectacular to watch.

To make this testing repeatable the team at Garage 54 crafted a beautiful test rig built to destroy Lada engines. Lada is a mainstay in former communist block countries where it was one of the only marques available for purchase during cold war era Eastern Europe. This engine was meant to work and that’s where its design principles end, there was no desire for high revving performance or driving pleasure. That’s why the Lada engine is the perfect candidate for this test. It’s probably the least likely engine to rev to a superbike 10,000 RPM.

Throwing a piston isn’t just an expression as we get to see this stressed engine throw a piston straight into the sky like a bottle rocket. It also highlights the importance of a robust oiling system as the engine suffered a huge amount of damage and eventually ceased due to the lack of oil to keep things lubricated.