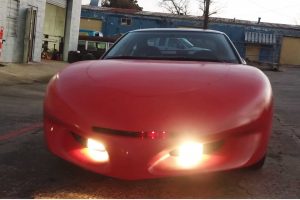 It doesn’t take an expert in film and television to know that reboots of successful movies and TV shows are rarely successful. Unfortunately, Knight Rider 2000 falls into the category of a cinematic misfire. Sure, the Hoff was still in it but he wasn’t enough to save the sinking ship. As such Videobob Moseley profiles one of the only remaining examples of the Knight Industries 4,000 hero car.

Aside from the dismal box office showing, we’d be remiss not to mention that there are plenty of great stories behind the production. The Hoff did sit behind the wheel of the car in the video, but there were several other examples used for the film.

As the futuristic star car could also function as a boat, an amphibious version had to be made. However, soon after shooting had commenced at the RiverWalk in San Antonio, Texas, the car sank. Thankfully, the boat turned submarine was rescued and now resides in a collection based in Miami.

While the example in the video may appear to be in relatively good nick from the exterior, it does need quite a lot of work under the skin. It suffered an engine failure after appearing in an aggro driving scene from a TV series called Scare Tactics. Semantics aside, this might not actually matter that much, because – big surprise – the Knight Industries 4,000 isn’t road legal.

All things considered, nothing can take away from the fact that this car was screen used in a big-budget film featuring David Hasselhoff. Sure, it’s a bit rough around the edges, but it comes with a hell of a story – and a $20,000 starting bid on eBay.