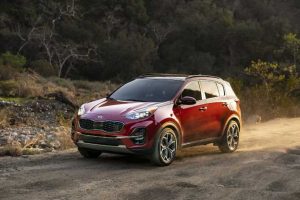 As you can probably imagine, no one—not NHTSA, not Kia, and certainly not you—wants your Kia Cadenza sedan or Sportage SUV to burn to the ground. And especially not if it’s parked in your garage. That would be … well, somewhere on the spectrum of “very bad” to “potentially tragic.” So, if you own an affected car, and we’ll tell you how to determine that in a second, NHTSA and Kia would like you to park it outside until they can implement a fix, as the Associated Press reports.

First, if you own a 2017-2019 Kia Cadenza or 2017-2020 Sportage, head over to the NHTSA’s recalls page and plug in your VIN. In fact, you should do this if you own any vehicle at all, every once in a while, just to see if there are any outstanding recalls. Use this as an excuse to check yours today. If you don’t have the vehicle identification number, you can use the year, make, and model, too, but a VIN search provides the most exact results.

Back to the issue at hand: a fire risk that the company has traced to the braking system. The electronic brake controller short-circuit, increasing the risk of a fire. Warning lights on the dash could indicate that the problem is imminent. The vehicles affected do not have the Smart Cruise Control System. If you notice an issue, smell a burning odor, or have an affected vehicle, park it outside away from any structures until the dealer can replace some fuses in the vehicle in order to fix the issue.

Recall notices will start going out in late April. Until then, exercise caution when driving and parking affected vehicles.

Kia’s statement on the recall is below:

Potential warnings include illumination of various warning lights on the instrument panel including tire pressure warning light, ABS warning light, MIL warning light, burning/melting odor and smoke from the engine compartment. This issue was identified in a foreign market and there are no known fires, crashes or injuries in vehicles sold within the U.S. market related to this issue.

KMA Action: All owners of the subject vehicles will be notified by first class mail beginning April 30, 2021 with instructions to bring their vehicles to a Kia dealer for the recall repair. Until the recall repair is completed, owners are recommended to park their vehicles outdoors and away from other vehicles or structures. Kia dealers will be instructed to replace certain fuses in the electrical junction box to prevent an over-current condition in the HECU’s electrical circuit board.

For Cadenza vehicles, dealers will be instructed to install a new fuse kit which contains a 25A fuse instead of a 40A fuse.
Kia will reimburse owners for repair expenses already incurred pursuant to Kia’s General Reimbursement Plan filed May 11, 2020. Customers with questions may contact KMA consumer assistance at 1-800-333-4542 or their Kia dealer.