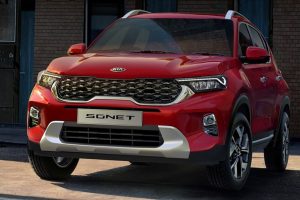 All six variants share the same 1.5 litre Smartstream four-cylinder NA petrol engine, which outputs 115 PS and 144 Nm of torque. Buyers get to choose between a six-speed manual or Kia’s own CVT (known as intelligent variable transmission, or IVT) with eight virtual ratios. The onboard Traction Mode offers Snow, Mud and Sand drive modes, which goes on top of the Normal, Eco and Sport modes.

For a daily city runabout, the powertrain certainly seems adequate. What makes the Sonet stand out, though, is its equipment levels. Depending on the trim, the Sonet is available with full LED headlights with LED daytime running lights, huge tiger nose grille with chrome surrounds and black inserts, roof rails, powered sunroof, LED combination tail lights, and 16-inch five-spoke wheels. The plastic body cladding is standard across the board, though the satin skid plates are reserved for top models only. Six exterior colours are available – Intense Red, Aurora Black Pearl, Beige Gold, Glacier White Pearl, Iron Grey, and Intelligency Blue.

Inside, the Sonet looks like a mini Sorento, sporting vertical air vents and an eight-inch freestanding infotainment and instrument display panel. The infotainment system features wireless Apple CarPlay and Android Auto, while additional features include a nice flat-bottom steering wheel and ventilated seats.

Kia says the latter is a first in class, so that’s a nice bonus. There’s also a seven-speaker Bose sound system, 10 Watt wireless smartphone charger with cooling pad, and LED ambient lighting that synchronises with the music (LED Sound Mood Lights). There is a USB port behind the centre tunnel for rear passengers, but the seatbacks are not foldable. Boot space is 392 litres.

For safety, it gets six airbags and VSC as standard. Also on are ABS with EBD, traction control system, brake assist, reverse camera with guide lines, and passive cruise control. The Sonet was originally designed for the Indian market, but like the Seltos, it will be a global model. Will it come to Malaysia? If so, will you pick this over the upcoming Perodua D55L SUV with a 1.0 litre turbocharged engine?