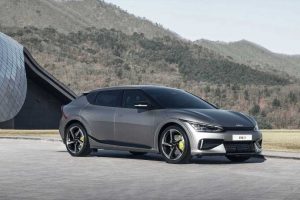 We’ll see the GT performance badge on the back of more new electric models.

Kia chose to reveal the EV6 Kia EV6 GT Rendered With Sporty Design Cues with a drag race video showing it could out-accelerate many supercars and sports cars, only being beaten by a McLaren 570 (and only just) as they crossed the finish line. This illustrates the fact that Kia is not only interested in making affordable EVs for average car buyers, but it also wants to make performance EVs for people who enjoy a powerful, sporty car.

And it comes as no surprise to learn that the automaker has more GT-badged performance EVs in store. AutoExpress talked to Kia’s Head of Global Brand and Customer Experience Division, Artur Martins, who explained that

For us it was really important that this car delivers on the brand that we want to build and how we want to position Kia for the future. It is important for us that the new products that we’re going to bring on the dedicated platform that we are consistent with the brand in terms of the elements that, together, will stand for the values of Kia. The GT is an important element of that.

In case you are not familiar with Kia’s model designations, the GT badge is used on the brand’s hottest performance offerings. There are also GT Line models, although those just mimic the look of the actual GT models, but without any of the added performance. For instance, Kia has a GT version of the Stinger, Forte or the K5 and plenty more GT Line models in its lineup.

The manufacturer has announced it plans to launch a total of 11 new EVs by 2026, and based on what we now know, it’s safe to assume that at least some of them will have dedicated GT variants. Seven of these models will be built on the dedicated E-GMP platform, while the other four will just be fully-electric versions of ICE vehicles already in the lineup.