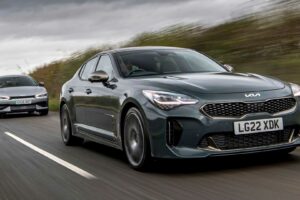 Well, this doesn’t come as much of a surprise. Kia is discontinuing the Stinger in the UK as the automaker prepares to launch the electric EV6 GT in the market. Kia first previewed the Stinger in 2011 before a production version arrived for the 2018 model year.

Over the last few years, there have been numerous reports and rumors predicting the model’s demise. One report as recently as last month suggested that Kia is planning to end Stinger production in April of next year. Stinger sales in the automaker’s home country make it the company’s slowest-selling model in South Korea.

In announcing the Stinger’s demise in the UK, the automaker called it “a totemic car” for the company, which “served as a bold statement of intent for the brand.” It also helped introduce the Kia brand to new buyers and transform its perception. Kia UK President and CEO Paul Philpott said that the Stinger would go down as a “transformative moment” for the automaker, which changed quite a bit in the 2010s.

Serving as the Stinger’s replacement in the UK market will be the electric Kia EV6 GT, “the ideal car to take the baton from the Stinger,” said Philpott. The EV6 GT delivers 577 horsepower (430 kilowatts) and 546 pound-feet (740 Newton-meters) of torque. In 2021, Kia’s design boss hinted that the EV6 GT could serve as the brand’s replacement for the Stinger in the lineup. Kia will start EV6 GT deliveries in the UK before the end of the year.

The sporty sedan was never a strong seller for the brand. Its best sales year in the US was its first full year of sales in 2018. Since then, sales have leveled off at around 13,000. Kia refreshed the car for the 2021 model year, tweaking the exterior design, upgrading the cabin, and revamping the powertrain selection. Kia added a new North American-exclusive engine – a 300-horsepower (223-kilowatt) 2.5-liter turbocharged four-cylinder.

While Kia has stopped Stinger sales in the UK, the automaker did say that production will continue in South Korea. It will also fulfill all existing customer orders for the model in the UK.