Plug-in hybrid version of the Kia XCeed promises up to 201.8mpg and 32g/km of CO2 from its petrol-electric powertrain 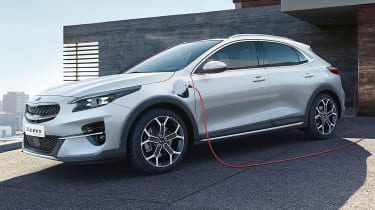 The Kia XCeed PHEV (plug-in hybrid vehicle) has officially gone on sale in the UK, and it promises buyers a crossover with up to 36 miles of electric-only range.

The plug-in hybrid system is familiar to us, as it’s also used in the Kia Niro PHEV. Power comes from a mix of 1.6-litre petrol engine and 60bhp electric motor – allowing for a combined 139bhp – and uses a six-speed dual clutch automatic gearbox. The 36-mile range is achieved through the use of a 8.9kWh battery pack, while charging takes two hours and 15 minutes using a 3.3kW charger.

The XCeed PHEV accelerates from 0-62mph in 10.6 seconds and has a top speed of 99mph. Fuel economy will vary wildly on individual use, but based on the official WLTP data it’ll achieve 201.8mpg when fitted with 16-inch alloy wheels, and 167.8mpg on 18-inch items. CO2 emissions for the 16- and 18-inch wheel variants stand at 32g/km and 38g/km respectively. 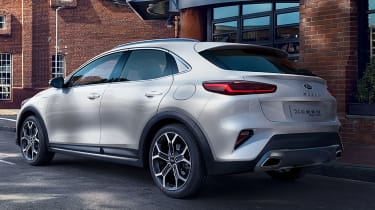 The XCeed shares its mechanicals with the rest of the conventional Ceed family, but superficially it’s almost completely different – only the front doors are shared with the hatchback and ‘Sportswagon’ Estate version. The XCeed rides 20mm higher, which combined with a new body means that it’s 48mm taller than the conventional Ceed.

The inclusion of the larger battery pack has compromised practicality compared to the combustion powered XCeed models: the usual 426-litre volume shrinks to 291 litres.

What do you think of the new Kia XCeed PHEV? Let us know your thoughts in the comments section below…